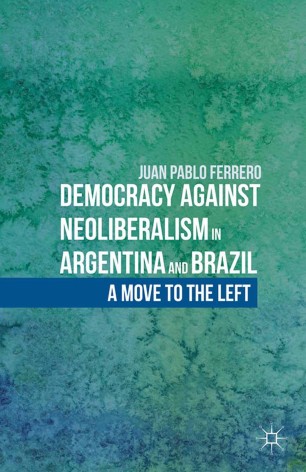 Democracy against Neoliberalism in Argentina and Brazil

A Move to the Left

This book provides a comprehensive analysis of the emergence of left-wing politics in two of the largest South American nations: Argentina and Brazil. It looks in particular at the transformation of democracy seen as "point of arrival" into democracy seen as an unending struggle for greater equality.

Juan Pablo Ferrero is Lecturer in Hispanic Studies at University of Bath, UK.

"This is an important book for our era of disillusionment with representational democracy. Latin Americanists interested in democracy beyond the state and political leaders will find a wealth of empirical and theoretical insights into how ordinary people come to mobilize and challenge a global paradigm. But it is also a book for all those interested in democracy as a process not a 'thing.'" - Jenny Pearce, University of Bradford, UK

"Ferrero synthesizes and extends a number of influential, broadly post-Marxian social theoretical resources, by way of subtle, illuminating, and substantive case-study-based analyses of the dynamics of the 'left turn' in Latin America. Democracy Against Neoliberalism in Argentina and Brazil is an original, compelling work of social theorizing, which also deserves a wide readership among those committed to the radically democratic promise of an emerging new global Left." - Chamsy el-Ojeili, Victoria University of Wellington, New Zealand

"Although of immense global interest, recent political developments in Latin America get disproportionately little and often distorted attention in Western media as well as in academic debates. This comprehensive and inspired study of Argentina and Brazil will significantly help redress this lacuna. Ferrero's book vividly portrays and analyzes in astonishing detail the (radical) democratic forces driving socio-political change in 21st century Latin America. It offers an account that is truly revealing in its global implications." - Yannis Stavrakakis, Aristotle University of Thessaloniki, Greece