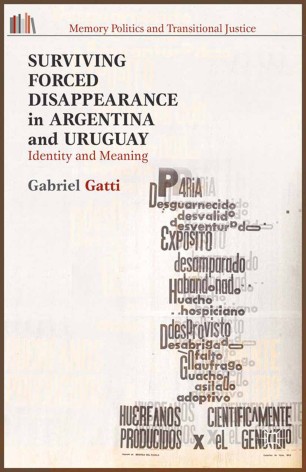 Based on extensive fieldwork that began in Argentina, this book asks how detained and disappeared persons inhabit the categories that international law has constructed to mark, judge, understand, and repair the horror.

Gabriel Gatti is Profesor Titular de Universidad at the University of the Basque Country, Spain.

'Through solid sociological and historical research, Gabriel Gatti has made a major contribution to the study of the detained-disappeared in Latin America.' - Danilo Martuccelli, Professor of Sociology, Université Paris 5-Sorbonne, France

'From his place as both relative of disappeared persons and sociologist, Gatti has written a powerful and unsettling account of the journey to understand and theorize the causes and effects of forced disappearances. Substantiated by rich data gathered through rigorous fieldwork, the author weaves sophisticated theoretical analysis with his own reflections about the emotions and the questions that the process prompts, and how these challenge his solid academic study. Pointing to the validity and limitations of dominant discourses, this work is a compelling call for the need to incorporate new ideas, languages, and ways of representing to study disappearances and the strategies to survive them.'- Susana Kaiser, Associate Professor of Media Studies and Latin American Studies, University of San Francisco, USA

'Gatti provocatively explores the figure of the disappeared in Latin America, seeking to shatter commonplaces and empty discourses, while at the same time looking critically at the strategy of disappearance and many of the attempts to exorcise it. A necessary, at times discomforting book that questions and disassembles rigid truths that have become useless over time, this is essential reading for understanding both forms of resistance and the specificity of disappearance as a strategy for spreading terror.' - Daniel Feierstein, Professor of Sociology and Director of the Genocide Studies Center, Universidad Nacional de Tres de Febrero, Buenos Aires, Argentina, and President of the IAGS (International Association of Genocide Scholars, 2012-2014)

'One of the greatest achievements of Surviving Forced Disappearance is that it recognizes different places of enunciation without becoming permanently fixed in any one place. The son, brother, and brother-in-law of disappeared persons, Gatti removes himself from his position as relative, one that strips him of the possibility of being a protagonist. He is a son who refuses to be 'the son of,' a brother who is but is not a 'relative,' and an academic who points out the limitations of meaning while still deploying a full academic arsenal. Gatti gradually constructs that 'out of place' that is, above all, a moving out of the place socially and politically assigned. Especially welcome is his determination to avoid any place in the 'hierarchy of hardship,' in particular, the condition of damaged, assisted, passive, apolitical 'victim' from which he insistently distances himself.' - Pilar Calveiro, Universidad Autónoma de Puebla, Mexico, author of Poder y desaparición. Los campos de concentración en Argentina