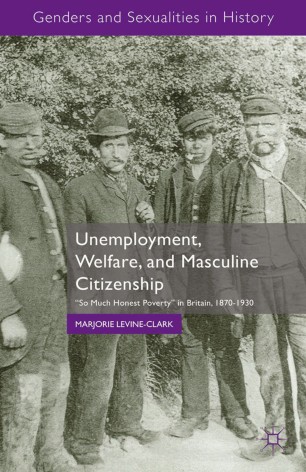 This book examines how, from the late nineteenth century through the 1920s, British policymakers, welfare providers, and working-class men struggled to accommodate men's dependence on the state within understandings of masculine citizenship.

Marjorie Levine-Clark is Associate Professor of History at the University of Colorado Denver, USA. She has published widely on gender, health, labor, and social policy in nineteenth- and early twentieth-century Britain, including the book Beyond the Reproductive Body: The Politics of Women's Health and Work in Early Victorian England (2004).

“Marjorie Levine-Clark opens her account of unemployment and masculinity with a comparison to the present. … the author provides a nuanced analysis of gender during the era of the contested discovery of unemployment. Overall, this is a well-researched and well-written book, and it makes an important contribution to British welfare history.” (Matt Perry, The American Historical Review, Vol. 121 (2), April, 2016)

“Levine-Clark tackles the expansion of welfare in Britain’s late nineteenth and early twentieth centuries with a sharp, engaging focus on the state’s cultivation of working-class masculine hierarchies. … Levine-Clark’s careful exploration of gender and the meaning of employment offers a fresh perspective on work, the state, and political subjectivities, one that should influence future research.” (Katie Hindmarch-Watson, Journal of Modern History, Vol. 88 (4), 2016)

“Levine-Clark (history, Univ. of Colorado Denver) has written an extremely useful book on masculinity, unemployment, labor citizenship, and welfare. … Chapters of the work could be usefully assigned in advanced undergraduate or graduate courses in either gender or British history. Summing Up: Highly recommended. Upper-division undergraduates and above.” (R. J. Bates, Choice, September, 2015)

"Unemployment, Welfare, and Masculine Citizenship will appeal to those working in fields across the history of modern Britain, as well as scholars working on histories of the welfare state, gender, and other topics in international perspective. It seems likely that future research in the British context will help to highlight the myriad ways in which this particular system of welfare worked itself out across regional and social differences, and that Levine-Clark's work will serve as the first step in this new direction." - Reviews in History