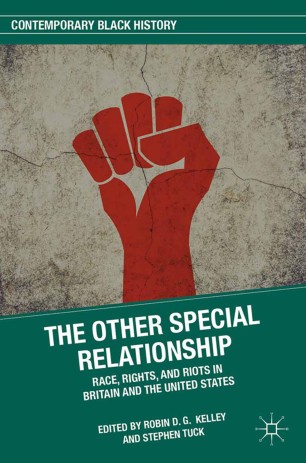 The Other Special Relationship

Race, Rights, and Riots in Britain and the United States

The close diplomatic, economic, and military ties that comprising the "special relationship" between the United States and Great Britain have received plenty of attention from historians over the years. Less frequently noted are the countries' shared experiences of empire, white supremacy, racial inequality, and neoliberalism - and the attendant struggles for civil rights and political reform that have marked their recent history. This state-of-the-field collection traces the contours of this other "special relationship," exploring its implications for our understanding of the development of an internationally interconnected civil rights movement. Here, scholars from a range of research fields contribute essays on a wide variety of themes, from solidarity protests to calypso culture to white supremacy.

Robin D. G. Kelley is Professor of American Studies and Ethnicity at the University of Southern California, USA. He is the author of the prize-winning books Thelonious Monk: The Life and Times of an American Original (Free Press, 2009)and Freedom Dreams: The Black Radical Imagination (Beacon Press, 2002). Stephen Tuck is University Lecturer in American History and a tutor and fellow at Pembroke College, Oxford University, UK. He is the author of the prize-winning books We Ain't What We Ought To Be: The Black Freedom Struggle from Emancipation to Obama (Harvard University Press, 2010) and Beyond Atlanta: The Struggle for Racial Equality in Georgia, 1940-1980 (University of Georgia Press, 2003).