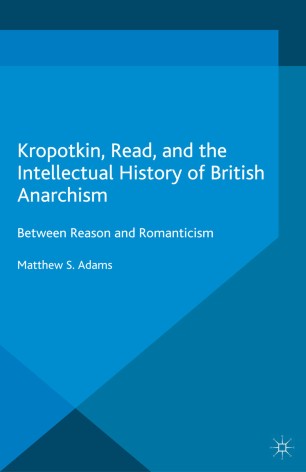 Kropotkin, Read, and the Intellectual History of British Anarchism

Between Reason and Romanticism

Although marginal as a political force, anarchist ideas developed in Britain into a political tradition. This book explores this lost history, offering a new appraisal of the work of Kropotkin and Read, and examining the ways in which they endeavoured to articulate a politics fit for the particular challenges of Britain's modern history.

Matthew S. Adams is Banting Postdoctoral Fellow at the University of Victoria, Canada. Amongst others, he has published in the journals Historical Research, Journal of the History of Ideas, History of Political Thought, and History of European Ideas.

“Matthew S. Adams innovative intellectual history of British anarchism...aims to bring to light a dimension of Britain's cultural past that has been ill served by historians. ... we have Adams to thank for having identified and astutely assessed the various ways in which both Kropotkin and Read articulated to a British audience the contemporary relevance of a much-maligned and poorly understood ideology.” (George Esenwein, American Historical Review, June, 2017)

“This work has contributed significantly to our understanding of the political, social, and cultural history of the anarchist Anarchist Studies movement … . this is an excellent piece of scholarship would be an understatement of colossal proportions. … Adams has set the agenda for anarchist intellectual history going forward. I have no doubt that the seed he has planted will yield a bountiful harvest in the years to come.” (Nathan Jun, Anarchist Studies, Vol. 25 (2), 2017)

“The strength of Adams’ interesting and intelligent book is that it gives us a view of anarchism as a dynamic tradition of thought that is integral to any wider intellectual history. And in one memorable phrase, Adams explains why we should not ignore it. Kropotkin and Read, by ‘Their pursuit of reason uncovered a universe of wonder’ … . This book helps us join them.” (Peter Ryley, European Review of History, Revue européenne d'histoire, Vol. 23 (1-2), 2016)

“In directing his readers’ attention to the connections between Kropotkin and Read, Adams has indeed pointed to one of the most important streams that fed into British anarchist thought more generally. … Adams’s book is a welcome addition to a growing number of studies aimed at recapturing the largely lost tradition of British anarchism and plugging a significant hole in our understanding of anarchist history and ideas.” (Benjamin J. Pauli, New Political Science, Vol. 38 (2), 2016)

“This volume serves as an excellent account of British anarchism as an intel­lectual history, which explores the translation and impact of ideas and practices within a transregional context.” (Oscar Norris-Broughton, Global Histories, Vol. 1, December, 2015)