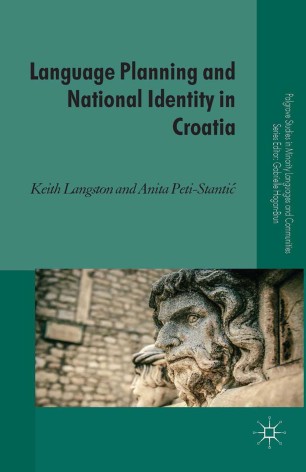 Following the collapse of the former Yugoslavia, Croatian was declared to be a separate language, distinct from Serbian, and linguistic issues became highly politicized. This book examines the changing status and norms of the Croatian language and its relationship to Croatian national identity, focusing on the period after Croatian independence.

Keith Langston is Associate Professor of Slavic Studies and Linguistics at the University of Georgia, USA. He is the author of ?akavian Prosody: The Accentual Patterns of the ?akavian Dialects of Croatian and other studies on Slavic phonology and morphology, in addition to research on the sociolinguistic situation in the former Yugoslavia.

Anita Peti-Stanti? is Professor of South Slavic Languages and the Chair of Slovene Studies at the University of Zagreb, Croatia. She is the author of Language, Ours and/or Theirs: An Essay on the Comparative History of South Slavic Standardization Processes and a Slovenian-Croatian and Croatian-Slovenian Dictionary, as well as studies on South Slavic word order and clitic placement.

“The book would prove useful for linguistic scholars, particularly those focused on Slavic languages, as it provides a plethora of examples detailing the minutia of linguistic variation, both between Croatian and other former Yugoslav languages (particularly Serbian), as well as between different nationally-recognized, or sanctioned, versions of Croatian throughout varied time periods, or as produced by different scholars. … It adds greatly to the literature on Slavic languages, as well as socio-political scholarship of the former Yugoslavia.” (Jacquie L. Greiff, Language Policy, September, 2015)