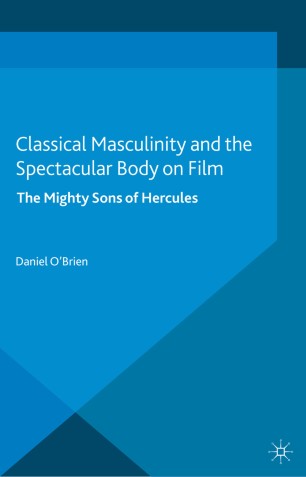 Classical Masculinity and the Spectacular Body on Film

The Mighty Sons of Hercules

The muscle-bound male body is a perennial feature of classically-inflected action cinema. This book reassesses these films as a cinematic form, focusing on the depiction of heroic masculinity. In particular, Hercules in his many incarnations has greatly influenced popular cultural interpretations of manliness and the exaggerated male form.

Daniel O'Brien is a tutor in Film Studies and a freelance writer, contributing to various reference works and producing articles and reviews for journals such as Film International. He has written books on such subjects as Clint Eastwood, Frank Sinatra, British science fiction, Hannibal Lecter and Daniel Craig.

"Daniel O'Brien's work here is both foundational and invaluable. Perhaps his most profound statement about these films is his most simple: that the strongman figure, embodied in Hercules, is part of our masculine mythopoesis as surely as the intellectual problem-solver, the suave secret agent, and the mysterious foreign count. This figure thus represents our desire to supersede the bonds of our own masculinity, reflecting not the dominant arm of the patriarchy, but that which surpasses it - the mythical, mystical link between human and deity, bound up in bodies too large to readily codify. This is a text that any scholar, critic, or fan of sword-and-sandal films will want readily available for repeat consultation." - Michael G. Cornelius, Wilson College, USA

"Forget the unwieldy title and just marvel at the fact that academic writing on film can be as lively and stimulating as this! Daniel O'Brien produces a remarkably allusive study of the cinema's treatment of the muscular male physique (with particular attention to the Hercules movies directed by such talented auteurs as Vittorio Cottafavi and Mario Bava, as well as lesser talents such Pietro Francisci, responsible for the two Steve Reeves Hercules movies). O'Brien examines the fascinating subtexts of this oft-despised genre and its contradictory approaches to masculinity. What's more, O'Brien performs a particularly impressive feat of prestidigitation, couching complex notions within prose that is always supremely readable. Classical Masculinity and the Spectacular Body on Film - both for its complex, prodigal ideas and its counterintuitive clarity - should be required reading both for afionados of genre cinema and for those academics unable to write anything but clotted, impenetrable prose." - Barry Forshaw

'Peplum films' [were] the trashy, kitsch and camp mythological romps popular in the late 1950s and early 1960s. This lowbrow epic genre is the focus of Daniel O'Brien's book, and he rightly argues that it is a subject worthy of study." - Lloyd Llewellyn-Jones, THE