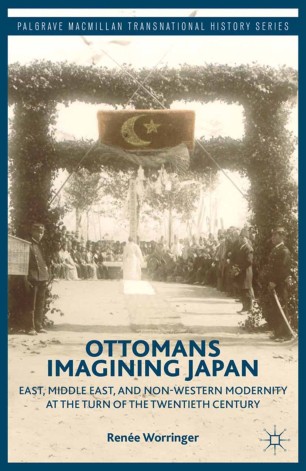 East, Middle East, and Non-Western Modernity at the Turn of the Twentieth Century

Today's "clash of civilizations" between the Islamic world and the West are in many ways rooted in 19th-century resistance to Western hegemony. This compellingly argued and carefully researched transnational study details the ways in which Japan served as a model for Ottomans in attaining "non-Western" modernity in a Western-dominated global order.

Renée Worringer is Associate Professor teaching Islamic and Middle East History at the University of Guelph in Ontario, Canada. She previously taught at the University of Queensland, Australia. Her research explores how perceptions can alter historical outcomes, and she has published several articles and translations of texts relating to the relationship between the Ottoman Empire and the Japanese in the late nineteenth and early twentieth centuries.

"Using the ways Ottomans imagined Japan to trace the categories and concepts with which they also imagined a future for themselves, Renée Worringer traces the path of an Ottoman escape from Europe through the embrace of Japan. This is an important contribution to understanding what it involved to search for a modernity that circumvented Europe." - Nile Green, Professor of History and Director of the Program on Central Asia, UCLA, USA, and author of Terrains of Exchange: Muslim Interactions from India & Iran to America & Japan (2014)

'Renee Worringer's well-written, comprehensive, and intellectually engaging account on the late Ottoman writings on Japan presents her readers a new perspectives on the origins of global modernity and non-Eurocentric world order. It is based on both deep research on primary materials and a masterful grasp of theory. This wonderful book will reorient the way we think about the modernization of Muslim societies, inter-Asian connections and decolonization.' Cemil Aydin, Associate Professor of History at The University of North Carolina at Chapel Hill, USA, and author of Politics of Anti-Westernism in Asia (2007)