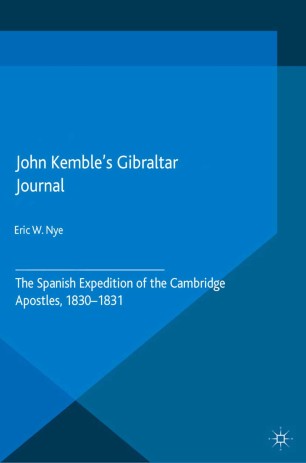 The Spanish Expedition of the Cambridge Apostles, 1830–1831

The summer of 1830 stirred revolutionary desires in young hearts across Europe. More than a generation of war and political instability had failed to dampen the fervor still felt from the French Revolution. In England the Cambridge Apostles took up the cause of the Spanish émigrés so movingly visible in London where they had sought refuge from the tyranny of Ferdinand VII and his suppression of constitutional rights. The Spanish Expedition of the Cambridge Apostles has always captured our imaginations. Its blend of idealism and daring, of theory and practice, of thought and energy, seems perfectly to fulfill the principles the Apostles steadfastly espoused, a combination of faith and works. The episodes comprised in most accounts of the expedition are symbolic and filled with intrigue: secret meetings, assumed names, hidden messages, contraband, narrow escapes from the authorities, treachery, and finally a bloody execution on the beach at Málaga. A host of newly-discovered documents now enable us to re-examine one of the most intriguing events in British intellectual history.

Eric W. Nye teaches at the University of Wyoming, USA and has held visiting positions at Cambridge and the Institute for Advanced Studies in the Humanities at Edinburgh, UK. For much of his career Nye has been tracking the legacy of Samuel Taylor Coleridge, especially in the transitional decades between the Romantics and Victorians. His concern for the Cambridge Apostles arose from a project to renew interest in John Sterling, whose life was told so convincingly yet so inadequately by Thomas Carlyle.

“Nye's book is a compendium of archival material, cooperative work among American and European academics, translations of different languages, and a methodical transcription. The end result is an exhaustive interdisciplinary study--literary, historical, cultural, and linguistic--that will attract teachers and students with an understanding of the subject, and an intimate diary that will fascinate anyone interested in the Cambridge Apostles in Gibraltar.” (Conxita Domènech, Hispania, Vol. 100 (1), March, 2017)

"Professor Eric Nye, who has devoted his career to the study of the writer John Sterling, has placed us deeply in his debt with this remarkable new volume, which presents John Mitchell Kemble's Gibraltar Journal and other appended documents that cast light on the Cambridge Apostles and their Spanish expedition of 1830-31. Kemble's journal is an invaluable addition to the primary literature on this notable episode. . . .This edition's strong factual and documentary foundation ensures that it will make a lasting and substantial contribution to the field of early nineteenth-century studies." - Carlyle Studies Annual

"In his introduction to John Kemble's journal, Eric Nye accuses Greene of underestimating the seriousness of the Apostles. He reckons Greene had been misled by Carlyle's Life of John Sterling, in which the Spanish venture is all about sorcerers' apprentices wreaking mischief with Coleridgean mystical 'moonshine'. But in fact, Greene was more disingenuous. He wanted to show that the Apostles were wiser than their counterparts of the 1930s, less deluded about their own importance, and he could do this only by omitting half the story which is a pity, because it's the half that would have suited his imagination better. It's the novel he never wrote." - London Review of Books