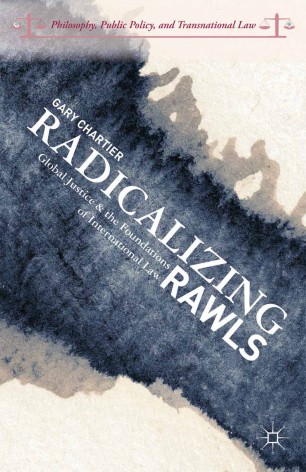 Global Justice and the Foundations of International Law

This book is a critical examination of John Rawls's account of the normative grounds of international law, arguing that Rawls unjustifiably treats groups - rather than particular persons - as foundational to his model of international justice.

Gary Chartier is Professor of Law and Business Ethics and Associate Dean of the Zapara School of Business at La Sierra University, USA.

"Chartier has written a book of outstanding merit. Radicalizing Rawls confirms his place as one of the best political philosophers of our time." - David Gordon, Senior Fellow, the Ludwig Von Mises Institute, USA,

"Gary Chartier's reading of Rawls's work is nuanced, critical, and above all, clear. Radicalizing Rawls is at once intellectually provocative, deeply relevant to the contemporary global condition, and a sophisticated work of scholarship. This book will inspire readers to think about the legacy of Rawls's political philosophy in entirely new ways." Patrick Hayden, Professor of Political Theory and International Relations, University of St. Andrews, UK

"Is a commitment to private property compatible with a concern for distributive justice? Gary Chartier believes that it is. Chartier radicalizes this idea by simultaneously rendering it anarchic and taking it global. The result is a splendid book bold, innovative, and elegant." John Tomasi, Romeo Elton Professor of Natural Theology and Professor of Political Science and Philosophy, Brown University, USA

"Gary Chartier argues persuasively that John Rawls's own framework should lead him to abandon the idea of 'people' and substitute the moral unit 'person.' By suggesting that a just global order should be a stateless order, Chartier effectively calls into question deep-seated statist intuitions." Fernando R. Tesón, Tobias Simon Eminent Scholar and Professor of Law, Florida State University, USA

"Gary Chartier's cosmopolitan critique of Rawls's Law of Peoples stands out from the crowd for its defense of global anarchism. Chartier develops and extends John Tomasi's revisionary and libertarian reading of Rawls to support an ideal of 'global market anarchy.' The result is an unorthodox account of cosmopolitanism based in turn on an unorthodox reading of Rawls's theory of justice. Chartier's novel take on Rawls and cosmopolitanism is a challenging and stimulating addition to the existing debate." Kok-Chor Tan, Professor of Philosophy, University of Pennsylvania, USA