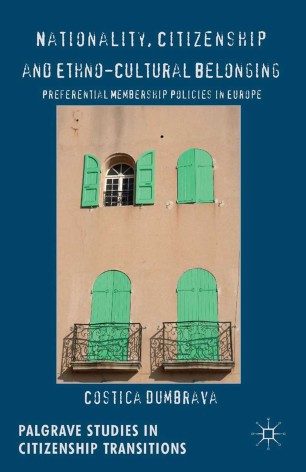 This book challenges mainstream arguments about the de-ethnicization of citizenship in Europe, offering a critical discussion of normative justifications for ethno-cultural citizenship and an original elaboration of principles of membership suitable for contemporary liberal democratic states.

Costica Dumbrava is Postdoctoral Researcher in the Department of Political Science of Maastricht University, The Netherlands and Executive Coordinator of the Maastricht Centre for Citizenship, Migration, and Development (MACIMIDE). His research interests lie in the field of applied political theory, particularly with regard to the issues of citizenship, migration and nationalism

"This book combines normative and empirical scrutiny of Europe's citizenship laws. Dumbrava shows why and how these fall short of liberal and democratic standards. As a political theorist, he asks what principles should guide the attribution of citizenship in democratic states; as a comparative political scientist he analyses preferential admission to citizenship on grounds of shared descent, ethnicity and culture in thirty-eight European states. Dumbrava's book does not only demonstrate that there is little convergence towards liberal standards of inclusion. It also develops highly original ideas about the foundations of citizenship. A very important and well-written contribution to a core aspect of democracy." Rainer Bauböck, European University Institute, Italy

"In this rich and detailed discussion of the role of ethno-cultural preferences in citizenship policies, Costica Dumbrava weaves together original empirical data and normative analyses. He enables us to see both the interpretive puzzles created by the question of what ought to count as an ethno-cultural preference and the normative issues at stake in allowing or forbidding such preferences. This is a valuable contribution." Joseph Carens, University of Toronto, Canada