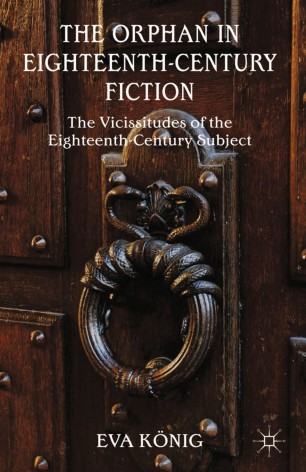 The Orphan in Eighteenth-Century Fiction

The Vicissitudes of the Eighteenth-Century Subject

The Orphan in Eighteenth-Century Fiction explores how the figure of the orphan was shaped by changing social and historical circumstances. Analysing sixteen major novels from Defoe to Austen, this original study explains the undiminished popularity of literary orphans and reveals their key role in the construction of gendered subjectivity.

Eva König is Lecturer at the University of Zurich, Switzerland, where she has taught courses on literary analysis and cultural theory. Her research interests include eighteenth-century literature, post-colonial literature, Marxist theory, gender theory, and psychoanalysis.

“König’s study … remains a valuable contribution to studies of identity in the novel, one which convincingly argues for the significance of orphaned characters in eighteenth-century fiction, and which makes a clear argument for the psychic function of narratives featuring orphan figures. This is an argument that other scholars will profitably be able to build upon and refine.” (Sarah Tindal Kareem, Modern Language Review, Vol. 3 (1), January, 2016)

“Eva König’s The Orphan in Eighteenth-Century Fiction: The Vicissitudes of the Eighteenth-Century Subject (2014) examines the figure of the orphan through Lacanian psychoanalysis. … König’s study is an excellent (and often provocative) first look at the reasons behind the prevalence of the orphan as a gendered subject and one that will certainly generate more discussion in the future.” (Tommi Kakko, English Studies, Vol. 97 (7), 2016)

"The Orphan in Eighteenth-Century Fiction brings together a psychoanalytical approach to the orphan as a gendered subject with the political evolution of class relations during the eighteenth century and a historical view of the development of the novel as a genre. The result is a masterful argument that balances original insights into individual texts with a far-reaching thesis about the literary-historical and psychosocial significance of the orphan figure." Professor Angela Esterhammer, University of Toronto, USA