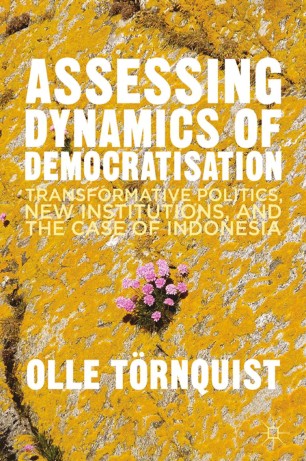 Transformative Politics, New Institutions, and the Case of Indonesia

The book summarises the critique of these approaches, suggests a comprehensive alternative framework, and shows how the alternative works in reality through a case study of the largest of the new democracies, Indonesia.

Olle Törnquist is Professor of Political Science and Development Research, University of Oslo, Norway. He has published extensively on politics and development, radical politics, and problems of democratisation in comparative perspective. His recent books include Politics and Development: A Critical Introduction, Popular Development and Democracy: Case Studies in the Philippines, Indonesia and Kerala, and Indonesia's Post-Soeharto Democracy Movement (with S.Adi Prasetyo & E.A.Priyono).

"Olle Törnquist is a distinguished scholar-activist who has been dedicated to the advance of social democracy throughout his professional life. This outstanding book records his efforts of many years, with Indonesian and other colleagues, to develop the means of understanding and so of carrying forward the process of democratisation in their countries. It deserves a wide readership amongst all those who are concerned, as scholars or as practitioners, with the deepening of democracy." - John Harriss, Professor of International Studies, Simon Fraser University, Canada

"Assessing the Dynamics of Democratization is one of the most unusual and most urgently needed books I have seen. Like some works, it crosses the boundaries between policy practice and academic work, speaking to both activist and scholarly audiences. It does so soberly, clearly, and with rigor. What sets it apart, however, is that it problematizes and reflects on that boundary-crossing, making explicit and questioning our assumptions along the way. Its call for strategically and knowingly engaging shallow democratic openings, rather than disparaging them from afar, is a much-needed rejoinder to current academic trends. Though rooted in a rich case study of Indonesia, this book speaks to all of us who try to connect critical, comparative, academic work with efforts at social change. This book is a bold and powerful antidote for the 'paralysis of analysis.'" - Gianpaolo Baiocchi, Associate Professor of Sociology and Ethnography, New York University

"This innovative, informative study broadens our thinking about assessing democratization, bringing in the neglected dimension of political inclusion and its relationship to genuine democratic transformation. The author skillfully combines a strong values foundation with a rigorous analytic approach." - Thomas Carothers, Vice President for Studies, Carnegie Endowment for International Peace

"Assessments of how far the global south has advanced on the democratic trail, has become a major industry. And western scholars do the utmost to influence policy makers and funding agencies by offering their own notions of democracy, and telling them what the state of democracy in 'this' or in 'that' country is, and what it should be. In many ways Dynamics of Democratization significantly departs from these, by now, exhausted formulae. Recognizing that people (in this case Indonesians) live and work in contexts that are shaped by political institutions, the argument simultaneously recognizes that acts of political agents sculpt and reconstitute, in noteworthy ways, the context. The recognition that political agency is both constrained as well as enabled by political contexts, and that political institutions influence as well are mediated by political agents, will impact studies of democratization, and methodologies for assessing democracy in a country, in times to come." - Neera Chandhoke, Professor emeritus of Political Science Delhi University; senior fellow Nehru Memorial Library and Museum

"Törnquist does three things in this book. First, he provides a clear and succinct critique of narrowly institutionalist assessments of democracy. Second, synthesizing a wide range of literature, he builds an alternative framework for assessing actual, living, transforming democracies. Third, drawing from his own deep immersion in the Indonesian case and a long resume of comparative scholarship, he puts his frame to work and offers a concise analysis of Indonesia's young democracy. The book has the rare quality of providing a sobering picture of the challenges of democratization even as it sharpens our analytical tools and points to alternative possibilities." - Patrick Heller, Professor of Sociology and International Studies, Brown University

"This volume provides refreshing insights into how the quality of democracy assessments could improve by becoming more action oriented and by empowering democratic actors of change, while retaining academic rigor. A must read for policymakers and practitioners alike." - Helena Bjuremalm, International IDEA, formerly Senior Democracy Advisor with Sida, the Swedish International Development Cooperation Agency)