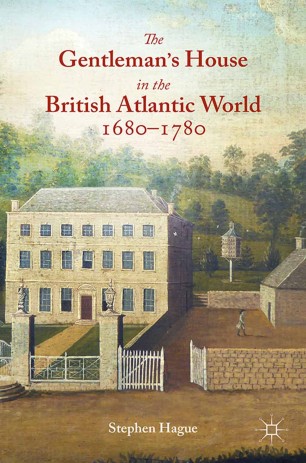 The Gentleman’s House in the British Atlantic World 1680–1780

The Gentleman's House analyses the architecture, decoration, and furnishings of small classical houses in the eighteenth century. By examining nearly two hundred houses it offers a new interpretation of social mobility in the British Atlantic World characterized by incremental social change.

Stephen Hague teaches modern European, British and British imperial history at Rowan University in New Jersey, USA. Previously, he held the SAHGB Ernest Cook Trust Research Studentship at Oxford University, UK, and is a Supernumerary Fellow of Linacre College, Oxford. He has published essays on the intersection of social, cultural, and architectural history.

“Stephen Hague’s The Gentleman’s House in the British Atlantic World, 1680–1780 focuses our attention on the understudied eighteenth-century phenomenon of the small country house. … this is an engaging and useful book, that sheds light on an important aspect of British Atlantic architectural practice and effectively uses it to illuminate unresolved issues in our understanding of eighteenth-century social structure.” (Emma Hart, American Historical Review, December, 2016)

“Clearly written, well structured, and appropriately illustrated, the book can be confidently recommended to students as well as scholars interested in the interrelationship between design and society.” (William Whyte, English Historical Review, Vol. 131 (549), April, 2016)

“The research is inventive and wide ranging, and the book serves as a useful guide to the literature relevant to such a study. … Hague’s study will be a useful work of reference for anyone studying these, and a source to be widely cited by those looking at the material culture and social history of the eighteenth-century Atlantic World.” (Roger H. Leech, Vernacular Architecture, Vol. 47 (1), 2016)