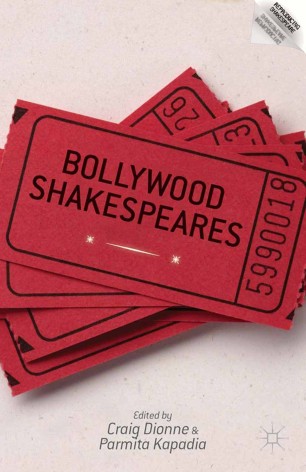 Here, essays use the latest theories in postcolonialism, globalization, and post-nationalism to explore how world cinema and theater respond to Bollywood's representation of Shakespeare. In this collection, Shakespeare is both part of an elite Western tradition and a window into a vibrant post-national identity founded by a global consumer culture.

"Shakespeare came to India during the British empire on the project of the 'civilizing mission.' Bollywood Shakespeares compellingly brings to life appropriations and adaptations of Shakespeare as a window into hybrid, post-national identities emerging from a global consumer culture in India today. In a theoretically nuanced framing argument, Dionne and Kapadia explore the interface between Shakespeare's theatre and the global stage of Bollywood cinema, while the ensuing essays examine in rich detail how Bollywood "uses" Shakespeare to represent and examine modern Indian life. Bollywood Shakespeares is an important and timely study into the politics of global culture and of the place of Shakespeare within it." - Jyotsna G. Singh, Professor of English, Michigan State University, USA

"This edited collection traces the historical origins of Bollywood's engagement with the Bard to Parsi theater, provides nuanced readings of well-established films (such as Shakespeare Wallah), and introduces readers to some less familiar ones (such as The Last Lear). Collectively, the essays in Bollywood Shakespeares demonstrate how both terms in the book's title are complicated and unsettled by their interaction. The volume also makes a significant contribution to theoretical discussion of the relationship between Shakespearean appropriation/adaptation and the rapidly changing field of Global Shakespeare." - Christy Desmet, Josiah Meigs Distinguished Teaching Professor of English, University of Georgia, USA