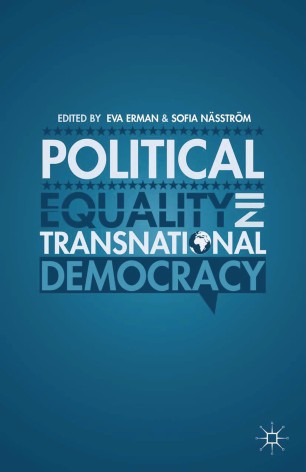 'This book puts political equality back at the heart of debates about transnational and global democracy. The contributors have produced a volume of great significance which will re-awaken debates in this field. It will become central reading for all those interested in the importance of political equality in our global age.' - David Held, Professor of Politics and International Relations, Durham University

'This volume is an important contribution to debates about transnational justice, political legitimacy and the possibility of democracy in non-state contexts. For those committed to political equality, it is an illuminating must-read.' - Jean L. Cohen, Nell and Herbert Singer Professor of Political Theory, Columbia University

'Through trade and tourism, communications and social networks, individuals of remote parts of the world are increasingly interconnected. But some of them are rich, others are poor, some live in powerful and affluent countries, others in deprived nations. Consequently, their input into social and political life is highly differentiated. Could a greater political equality contribute to better address some of the crucial problems of our age? If so, how could it be envisaged and implemented? With sophisticated and passionate arguments, these are the issues that are addressed by the authors of this book. This is an important contribution not only to political theory, but to our future global commonwealth.' - Daniele Archibugi, Professor of Innovation, Governance and Public Policy, University of London, and Research Director at the Italian National Research Council

'Cosmopolitanism generally suffers from an unfortunate disciplinary divide. Political scientists and lawyers offer creative institutional models, but they neglect philosophical foundations. Philosophers provide the foundations, but their thinking about institutions is often underdeveloped and even crude. With insightful contributions from some of the best minds in contemporary political thinking, this volume represents an important attempt to overcome that divide. And it does so by focusing on an important conceptual (and institutional) puzzle: political equality, and its place in global political theory. Filled with interesting insights, this book is a must read for anyone with an interest in contemporary political theory." - William E. Scheuerman, Professor of Political Science and West European Studies, Indiana University (Bloomington)