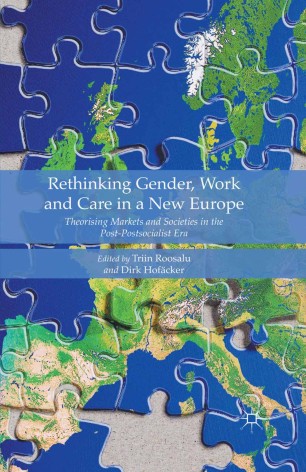 Rethinking Gender, Work and Care in a New Europe

Theorizing Markets and Societies in the Post-Postsocialist Era

Given the growing importance of Eastern European countries in the development of the EU, there is an urgent need to reconstruct the recent dynamic developments in women's work and care in these societies, and the socio-political determinants thereof. Considering their specific cultural, economic and historical development, it can be assumed that the trends and determinants of women's labour market trajectories in CEE countries differ significantly from those in the other European countries that have frequently made up the basis for established theories in social and labour market research. This being the case, can 'standard' theoretical approaches, mostly modelled on evidence from Western Europe, be transferred to the analysis of Eastern European countries? This edited collection scrutinises pivotal aspects of women's careers in Eastern Europe, providing a detailed overview of trends and determinants of women's employment in Eastern Europe, and reflecting critically on theoretical approaches in social and labour market research.

Triin Roosalu is Associate Professor and Researcher at the Institute of International and Social Studies, Tallinn University, Estonia.

Dirk Hofäcker is Professor of Quantitative Social Research Methods at the Department of Educational Sciences, University of Duisburg-Essen, Germany. He specializes in internationally comparative social research.

“This book examines issues of equal rights for parenthood in depth, by evaluating the situation in the CEE and Western European countries. The edited volume highlights the double burden of Bulgarian and Hungarian women, who still have to work in the household while also working outside of it, but also shows that being a single parent, regardless of gender, serves as a discriminatory factor in the Czech labour market.” (Arianna Radin, Work, Employment and Society, Vol. 33 (3), 2019)

"A quarter-century after the 'transition' from socialism to capitalism in Eastern Europe, the dynamics of gender relations at work and in the home remain deeply marked by the region's unique history, as well as the effects of integration into the global capitalist system. This rich panorama of case studies brings together original work by an impressive group of scholars, deploying multiple methodologies. The chapters carefully excavate the variations in gender, work and family among and within Eastern European countries, while also highlighting broader trends in the region as a whole. This book is a major contribution to the literature on this vitally important topic." - Ruth Milkman, CUNY Graduate Center, USA

"This volume stands out for addressing all the key issues of Eastern European women's employment situation and social standing in conceptually nuanced and empirically thoroughly documented ways. To find out how labor market institutions, family policies, family and work balances and occupational mobility interact for or against closing the gender gap, the authors compare the EU's new Central and Eastern European member states with each other as well as with the old member states. The volume makes a convincing case for taking seriously the similarities and differences in communist legacies, and in market pressures and social policy responses, and opens new avenues for cross-European comparative inquiry. For its encyclopedic coverage of relevant policy areas, country cases, and statistical and qualitative evidence, the book is an important contribution to scholarship in the field, and ought to be among the standard readings of university courses in studies of gender, labor markets, and social policy." - Béla Greskovits, Central European University, Hungary

"This highly informative and original volume gives a systematic and up-to-date overview over life courses and employment trajectories of women in a wide range of European countries, with a special focus on East Central Europe. How have East Central European societies navigated the double challenge of a major crisis of labor markets and the dismantling of existing social and family policies after the breakdown of socialism, and what has this done to female labor power? How far do concepts and theories developed for the Western context travel to the East, and where do we need to re-think Western experiences on the basis of East European developments? Does it makes sense to speak of a post-socialist model of female employment trajectories or do we rather see a variety of experiences, spanning Europe as a whole? The volume answers these questions with thorough empirical analyses, rich comparisons, and innovative theoretical concepts. The result is a must read for students of labor markets, social policy and gender politics." - Dorothee Bohle, Central European University, Hungary