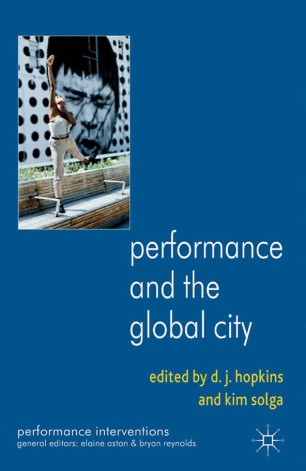 Performance and the Global City

Winner of the Association for Theatre in Higher Education Excellence in Editing Award 2016
Following the ground-breaking Performance and the City, this new volume explores what it means to create and experience urban performance – as both an aesthetic and a political practice – in the burgeoning world where cities are built by globalization and neoliberal capital.

“In Performance and the Global City, editors D. J. Hopkins and Kim Solga compile a selection of essays that tackle the complex relationship between spatiality and performance in the global world. … With a consistently high quality of theoretical rigour and critical analysis, this text offers valuable insights for both geographers and performance studies scholars interested in performance’s capacity to contribute to and spur change in urban spaces.” (Laine Zisman Newman, Theatre Research International, Vol. 41 (1), 2016)

“The book is divided into three parts, with four essays in each, thematically linked around attention to border zones, bodily movement in the city … .  It is a very coherent structure, which places the contributions into a productive dialogue with one another. … make a strong case for the richness of performance practice as an ideal lens through which to consider the politics of place.” (Fiona Wilkie, Theatre Journal, Vol. 67, December, 2015)

“This is a book that speaks to our present while also anchoring its many discussions in careful historical, theoretical, and practice-based contexts. Ultimately, then, Performance and the Global City proves well written and accessible, rigorous and substantial, ethical and engaged, and truly global in both reach and impact.” (Patrick Lonergan, Contemporary Theatre Review, Vol. 25 (4), 2015)

'Following on from Performance and the City, a well-curated collection of essays exploring performance's role in renegotiating urban space in the industrialized West post-9/11, editors D. J. Hopkins and Kim Solga have published a formidable follow-up. Performance and the Global City builds on its predecessor through a range of essays that explore performance's role in the process of global city mobilization the level of scholarship in Performance and the Global City is consistently high, including further contributions from Melissa Bucher, Philip Hager, Simon Jones and Paul Rae, and the cities covered represent an international cross-section of urban centres.' Performance Research