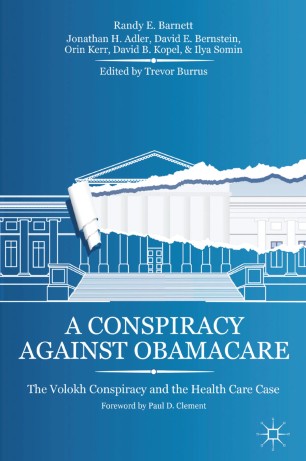 A Conspiracy Against Obamacare

The Volokh Conspiracy and the Health Care Case

The Affordable Care Act debate was one of the most important and most public examinations of the Constitution in our history. At the forefront of that debate were the bloggers of the Volokh Conspiracy who, from before the law was even passed, engaged in a spirited, erudite, and accessible discussion of the legal issues involved in the case.

"The constitutional debate over the Affordable Care Act was among the most vibrant in recent Supreme Court history, and there was no more important platform for the debate than the Volokh Conspiracy. By collecting the leading arguments for and against the constitutionality of the ACA, the editors of the Conspiracy - a blog with a provocative name and an ecumenical spirit - have performed an invaluable service." Jeffrey Rosen, President of the National Constitution Center and Legal Affairs Editor, The New Republic, USA

"In the old days, the legal conversation took place on law reviews, and it wasn't much of a 'conversation,' really. Now it takes place on lawblogs and it's rich and highly interactive. Legal historians of the future will find this book an indispensable source on the legal conversation around Obamacare. Glenn Reynolds, Beauchamp Brogan Distinguished Professor of Law at the University of Tennessee, and author of Instapundit.com