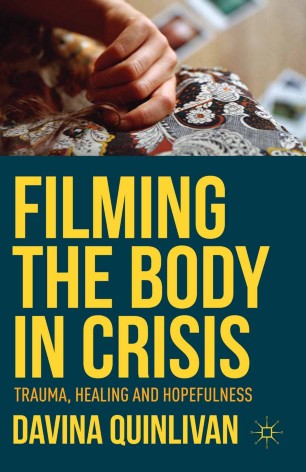 Filming the Body in Crisis

How does film affect the way we understand crises of the body and mind and how does it manifest other kinds of crises levelled at the spectator? This book offers vital scholarly analysis of the embodied nature of film viewing and the ways in which film deals with the question of loss, the healing body and its material registering of trauma.

Davina Quinlivan is Senior Lecturer in Performance and Screen Studies at Kingston University, UK. She is the author of The Place of Breath in Cinema (2012).

'In this highly evocative book, Davina Quinlivan combines Melanie Klein's thought with film theory to argue that film and screen-based media can serve as reparative objects for their viewers, with the potential to heal and sustain hope. Compelling, touching, and poised, Quinlivan's prose is a joy to read.' Sarah Cooper, author of The Soul of Film Theory (Palgrave, 2013)

'Davina Quinlivan's writing offers itself as a rare and precious combination of advanced theoretical acumen with humaneness of vision. Quinlivan's empathy with her object of study is tangible and it enriches her theoretical elaboration and critical approach, revealing a deep analytical versatility. That this exploration of the restorative powers of cinema includes close and insightful readings of key films (from A Dangerous Method to Waltz with Bashir to The Tree of Life to name but a few films that have caught the attention in the recent years and feature prominently in this book) makes its reading all the more enjoyable and important.' Martine Beugnet, University of Paris 7 Diderot

'Filming the Body in Crisis will be a defining text of film studies for the 21st century, as Quinlivan remembers the body remembers our bodies as sentient, physical, pained, suffering, full of desire, sadness, hope, and possibility. Arguing deftly for film as an object of hope, this very book models how film scholarship when sensitive, intelligent, mindful, rigorous, poetic might also heal and offer hope. I am grateful for this monograph, to which I will undoubtedly return in my own scholarship and teaching.' Kristi McKim, Hendrix College, USA

'Can non-visual perceptions, such as touch or the physical sensations of breathing, be experienced through audio-visual representation? Through an emphasis on human experience and its representation, Davina Quinlivan calls what is invisible of the body's interactions with the world, replicated by the privileging of the image in theories of film spectatorship, into question. As a consideration of the history of film theory and of the memories that shape each viewing subject, Filming the Body in Crisis is insightful.' - Elizabeth I. Watkins, University of Leeds, UK