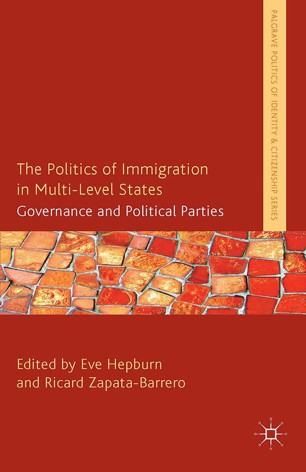 The Politics of Immigration in Multi-Level States

This book develops an exploratory theory of immigration in multilevel states addressing two themes: governance and political parties. It examines not only how, and by whom, immigration policy is decided and implemented at different levels, but also how it has become a key-issue of party competition across multilevel states.

"Comparative studies of immigration policies and politics generally regard the state as a single agent or arena. The essays and case studies in this volume show how territorial divisions inside democratic states matter for the governance of immigration as well as for political competition between parties over immigration issues. This book presents the most comprehensive and systematic attempt so far to understand how territorial interests at substate level shape responses to international migration." - Rainer Bauböck, European University Institute, Italy

"This is an outstanding contribution to theories of immigration policy, focusing on the important but neglected question of substate approaches to immigration. Hepburn and Zapata-Barrero's book is exemplary in developing a rigorous and compelling theoretical framework, which is then applied to produce rich and nuanced empirical findings across a number of European states. The research shows how distinct approaches to framing and governance have shaped immigration and integration policy at the substate level; but also how these differential dynamics of governance and political mobilisation on immigration have affected wider patterns of central/substate relations. The book looks set to become a key reference point for advanced students and scholars of immigration policy and territorial politics." - Christina Boswell, University of Edinburgh, UK

"The Politics of Immigration in Multilevel States constitutes an ambitious and sustained effort at bringing together the emerging literature on immigration, multilevel governance and political parties. This book innovates in various ways but especially though its account of state as well as substate levels initiatives in the field of immigration and citizenship policies. In addition, scholars mobilized in this project make a major contribution to the expanding literature on multinational democracies." - Alain-G. Gagnon, Université du Québec à Montréal, Canada

"The book a product of focused, sustained collaboration examines immigration in multi-level states and does so through the distinct but related lenses of governance and political parties. A diverse group of scholars bring multiple methods to bear on a range of cases, including Belgium, Canada, Italy, Spain, the UK and the Netherlands. The result is an edited volume that coheres well and brings a much-needed multilevel perspective to what is indeed 'one of the most contested issues in advanced democracies'" - Sheila Croucher, Ethnic and Racial Studies, 2015