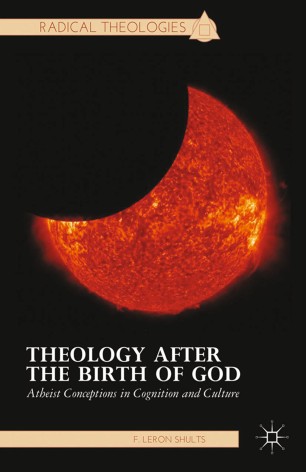 Theology after the Birth of God

Atheist Conceptions in Cognition and Culture

Engaging recent developments within the bio-cultural study of religion, Shults unveils the evolved cognitive and coalitional mechanisms by which god-conceptions are engendered in minds and nurtured in societies. He discovers and attempts to liberate a radically atheist trajectory that has long been suppressed within the discipline of theology.

F. LeRon Shults is professor of theology and philosophy at the University of Agder in Kristiansand, Norway and the author or editor of twelve other books, including his recent Iconoclastic Theology: Gilles Deleuze and the Secretion of Atheism. Shults is also a senior research fellow at the Institute for the Bio-Cultural Study of Religion in Boston, USA.

"A sophisticated and significant exploration of the implications of the biocultural study of religion; important not only for theologians and philosophers, but for all those interested in the role religion plays in the world today. With a series of entertaining metaphors, Shults guides us through the ways our evolved cognitive mechanisms both generate and constrain, in sometimes dangerous ways, our religious and anti-religious discourse. He makes a compelling case that this new paradigm is a profound game changer that no serious discussion of religion can responsibly ignore. I believe the same can be said of this book." - John Teehan, author of In the Name of God: The Evolutionary Origins of Religious Ethics and Violence (2010)

"Theology After the Birth of God is a valuable part of any atheist's library. Sun Tsu taught us to know our enemies; Shults teaches us that gods are not only man-made, but an inevitable byproduct of evolution. This information is devastating to the concept that gods are real, as Shults shows exactly how they are made, shaped, and used to the advantage of those in charge. He then takes the next step of teaching us how to use this information toward the betterment of society. Shults answers once and for all, how so many people can believe in a god and still be wrong." - David Silverman, President of American Atheists

"Taking his point of departure in the biocultural science of religion that a few of us have been promoting, Shults shows how even theology may benefit from these insights. His proposed anthropomorphic promiscuity and sociographic prudery is a refreshing take on religion, atheism, cognition and culture." - Armin W. Geertz, author of Brain, Body and Culture: A Biocultural Theory of Religion, Director of the Religion, Cognition and Culture Research Unit (RCC) at Aarhus University, Denmark