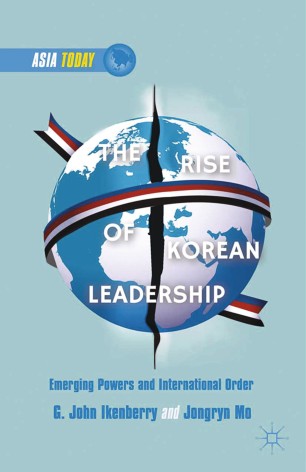 The Rise of Korean Leadership

Author G. John Ikenberry: G. John Ikenberry is the Albert G. Milbank Professor of Politics and International Affairs at Princeton University in the Department of Politics and the Woodrow Wilson School of Public and International Affairs. Ikenberry is also a Global Eminence Scholar at Kyung Hee University in Seoul, Korea. He is the author of After Victory: Institutions, Strategic Restraint, and the Rebuilding of Order after Major Wars (2001), which won the 2002 Schroeder-Jervis Award, and is co-author of Crisis of American Foreign Policy: Wilsonianism in the 21st Century (2009), The Alliance Constrained: The U.S.- Japan Security Alliance and Regional Multilateralism (2011), edited with Takashi Inoguchi and Yoichiro Sato, and Liberal Leviathan: The Origins, Crisis, and Transformation of the American World Order (2011). Author Mo Jongryn: Professor of International Political Economy at the Graduate School of International Studies, Yonsei University, Seoul, South Korea

"Ikenberry and Mo chronicle an impressive array of South Korean efforts to 'punch above its weight' and influence the global governance agenda despite its relatively small size and limited power. The story of South Korea's contributions, in the face of ever-widening challenges to global leadership, affirm a clear interest and role for emerging middle powers such as South Korea in perpetuating a liberal international order. The story of South Korea's efforts provides an intriguing counterargument to predictions that either anarchy or rivalry are inevitable features of the emerging global system." - Scott A. Snyder, Senior Fellow for Korea Studies and Director, the Program on U.S.-Korea Policy, Council on Foreign Relations, USA

"What does the 'rise of the rest,' the non-Western powers, portend for international order? Most analysts look for answers in the preferences of China, and some conclude that the open world economy underwritten by the United States since the late 1940s is doomed. Ikenberry and Mo direct our attention instead to middle-range wealthy countries, particularly South Korea. They show that Korea has a significant stake in liberal global order and already has been using its considerable leverage to help maintain and reform that order." - John Owen, Taylor Professor of Politics, University of Virginia, USA

"Rarely do empirical cases affect the way we innovate theories of state behavior. This book demonstrates how Korea has changed the way we think about middle powers in the leadership of the international system. The liberal internationalist model put forth by the authors is carefully and comprehensively argued. It is a wonderful book." - Victor Cha, D.S. Song-KF Professor of Government and Director, Asian Studies, Georgetown University, USA