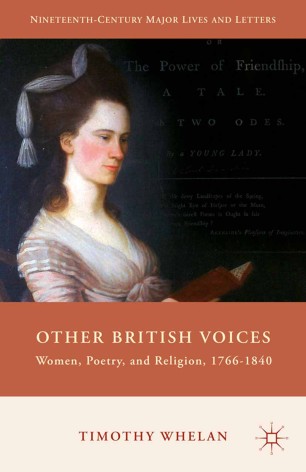 This volume discusses the lives and writings of five nonconformist women who comprised the heart of a vibrant literary circle in England between 1760 and 1840. Whelan shows these women's keen awareness and often radical viewpoints on contemporary issues connected to politics, religion, gender, and the Romantic sensibility.

Timothy Whelan is Professor in the English Department at Georgia Southern University.

“Timothy Whelan brings to this volume a formidable reputation as editor and interpreter of English female authors of the eighteenth and early nineteenth centuries, having presided over the eight-volume edition of Nonconformist Women Writers, 1720–1840 … . we have cause to thank Professor Whelan for bringing to the attention of historians a wider range of primary sources, including many still in manuscript, for the religious nonconformity of this period than was previously available.” (G. M. Ditchfield, The Journal of the Historical Association, October, 2016)

"Here is a case study in female literary tradition: the poems, letters, and other writings of a highly talented, multi-generational group of provincial, dissenting women friends. Such groups seldom leave enduring archives, and even feminist historians have often missed material lacking canonized names or links to dominant metropolitan, gentry, or Anglican culture. These women wrote, circulated their writing, and commented on each others' work without false modesty and with a confident sense of its value. They remain eminently readable. This study of their interconnections reshapes our understanding of ordinary pre-Victorian women's social and intellectual lives." Isobel Grundy, Professor Emeritus in the Department of English and Film Studies, University of Alberta, Canada

"From the time British Protestant Dissenting congregations emerged in the seventeenth century, women have been in the majority. Yet, their contribution to church life has often been treated as marginal. Drawing from manuscript sources of a small literary circle of 18th century women, Other British Voices: Women, Poetry, and Religion, 1766-1840 makes a valuable contribution to a much neglected aspect of Nonconformist history and offers fresh insight into the lives of some Nonconformist women." -Karen E. Smith, Honorary Senior Tutor in Theology, Cardiff University, UK

"Other British Voices: Women, Poetry, and Religion, 1766-1840 is groundbreaking: meticulous, nuanced, keenly attuned to the distinctive literary aesthetic of religious Dissent. The 'other voices' which have emerged from his painstaking archival research will permanently change our understanding of literary and religious culture in the period. A landmark work in the history of women's writing, a feat of discovery and scholarly tenacity, and an absorbing new critical perspective on creativity, sociability, and religious culture in the period." - Felicity James, Lecturer in Eighteenth and Nineteenth Century Literature, University of Leicester, UK