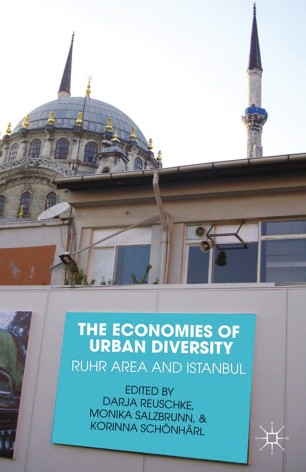 The Economies of Urban Diversity

The Ruhr Area and Istanbul

The Economics of Urban Diversity explores ethnic and religious minorities in urban economies. In this exciting work, the contributors develop an integrative approach to urban diversity and economy by employing concepts from different studies and linking historical and contemporary analyses of economic, societal, demographic, and cultural development. Contributors from a variety of disciplines geography, economics, history, sociology, anthropology, and planning make for a transdisciplinary analysis of past and present migration-related economic and social issues, which helps to better understand the situation of ethnic and religious minorities in metropolitan areas today.

"This is a most welcome book exploring, expanding and deepening our understanding of contemporary urban complexities. Significantly, with a focus on two revealing sites, the editors have brought together a set of robust studies examining the confluence of historical trajectories, political economies, ethnicity dynamics, and transnational connections." Steven Vertovec, Director, Max Planck Institute for the Study of Religious and Ethnic Diversity, Germany

"We live in the 'urban century'. Cities are becoming hotspots of human activity. They do not develop into a uniform species, but exhibit an enormous variety in appearances, socio-economic constellations, history, population and politics. The Economies of Urban Diversity is a well documented book that maps out and highlights the above megatrends. Taking the Ruhr Area Istanbul nexus as an orientation point, it offers a great illustration of the socio-economic drivers and aspects of urban diversity in modern multi-cultural agglomerations." - Peter Nijkamp, Professor, Vrije Universiteit Amsterdam, The Netherlands

"By problematising and historicising the concept of urban diversity, this pathbreaking volume throws incisive light on major economic and social issues affecting migrants in both Istanbul and the Ruhr Area. The transdisciplinary ethos of this book, where the varying perspectives and approaches of the contributors meet editorial excellence and eloquence, makes it stand out in current debates on the situation of ethnic minorities at a time when such impressive analytical intensity is needed." - Tom Slater, Reader in Urban Geography, University of Edinburgh, Scotland, UK