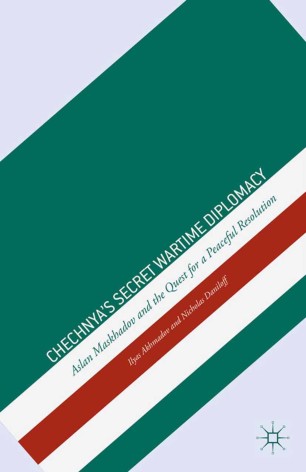 Aslan Maskhadov and the Quest for a Peaceful Resolution

This volume makes available transcripts and commentary from the secret correspondence between former Chechen foreign minister Ilyas Akhmatov and Chechen President Aslan Maskhadov. This correspondence provides revelatory insights into both men's attempts to secure Western support for a peaceful transition to an independent Chechnya.

Ilyas Akhmadov served as Minister of Foreign Affairs for the Chechen government from 1999 to 2005. He is the author of The Chechen Struggle: Independence Won and Lost (2010).

Nicholas Daniloff is a Professor of Journalism at Northeastern University, USA. A former correspondent for UPI and US News and World Report, he is the author of several books, including Of Spies and Spokemen: My Life as a Cold War Correspondent (2008).

Anatoly Semenov is Assistant Professor at the Defense Language Institute in California, USA.

Mark Kramer is Editor of the Journal of Cold War Studies and Senior Research Fellow at the Davis Center for Russian and Eurasian Studies, Harvard University, USA.

"Indispensable. Akhmadov and Daniloff have given us a vital and extraordinary record that has instantly become required reading for any serious discussion of the Chechen conflicts. Akhmadov's comments provide the necessary context to really understand the nuances of historical events as well as the depth and humanity of Maskhadov's character." - Lieutenant Colonel Robert W. Schaefer, U.S. Army Special Forces, and author of The Insurgency in Chechnya and the North Caucasus (2011)

"Contemporary Russian historians, specialists on the North Caucasus region and general readers will discover much useful information in this volume containing unique audio tapes made during the period July 2000-March 2003 by Chechen separatist president Aslan Maskhadov. Relentlessly hunted down by Russian forces he was finally killed in March of 2005 the Chechen leader emerges as a sympathetic if frequently confused and understandably paranoid leader. The book also sheds helpful light on the Russian and Chechen policies of the Clinton and George W. Bush administrations and as well as those of the OSCE and the Parliamentary Assembly of the Council of Europe." - John B. Dunlop, Senior Fellow, The Hoover Institution, author of The Moscow Bombings of September 1999 (2012)

"So important, yet so little known. Read about one brave Chechen's until-now secret quest for peace in his battered homeland. A serious and important book." - Marvin Kalb, Murrow Professor Emeritus at Harvard, USA, and author of The Road to War: Presidential Commitments Honored and Betrayed (2013)

"This is a remarkable piece of living and dying history: how the democratically elected leader of the Chechen Freedom Fighters (before the movement was taken over by Islamic extremists) and his foreign minister living in exile engaged in an effort to generate some sort of peaceful accord with Putin's Russia." - Dr. Zbigniew Brzezinski, National Security Advisor, Carter Administration.

"The disembodied voice captured in this unique book that of Aslan Maskhadov, the ill-fated leader of Chechnya's rebellion against Russia underscores the challenges facing all those who seek a negotiated solution to violent conflict. This is the illuminating story of a beleaguered opposition figure whose efforts to engage the Russian leadership, both directly and through international intermediaries, are undermined by a dizzying array of other actors with divergent goals, and by ruthless Chechen fighters who carry out horrific terrorist acts. Ultimately, Maskhadov is swept away by the sheer force of too many factors beyond his control. This book is a series of personal testimonies to a specific time, place, and set of circumstances, but it has a sobering message for today." - Dr. Fiona Hill, Director, Center for the United States and Europe, Brookings Institute, USA