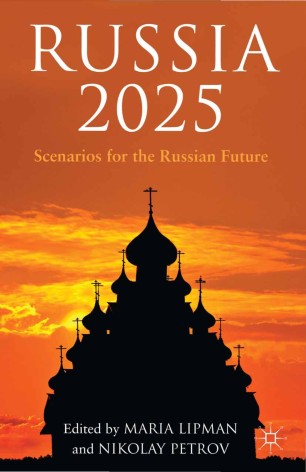 Scenarios for the Russian Future

Russia 2025 offers a compelling insight into Russia's future by exploring thematic scenarios ranging from politics to demographics. The widening rift between a modernizing, post-Communist society and a paternalistic government will ultimately shape developments in the coming years and will impact on state-society and Center-periphery relations.

'In Russia 2025 an all-star cast of Russia-watchers provides an in-depth examination of the societal, governmental, economic and political forces that will shape Russia over the next decade and a half. This is the essential guide for anyone trying to figure out what lies ahead for Putin's Russia.' Fiona Hill, Center on the United States and Europe, Brookings Institution, USA

'Russia-2025 is a fascinating book. It captures the complexity and uncertainty of the moment and the hard choices Kremlin and Russian society face. It is a great example of critical independent analysis, result of the collective effort of some of the most insightful experts on the country's politics, economy and society. The book provides something that is most lacking in the current debate on Russia, namely- alternative views on Russia's future.' Ivan Krastev, IWM Institute of Human Sciences Vienna, Austria

'Russia is never what meets the eye. President Vladimir Putin, a decade and a half into his dominance of Russian politics, follows a more authoritarian path than ever. But multiple fault lines accumulate beneath the surface. This fascinating collection is the best guide available to the forces simultaneously maintaining and undermining the Russian status quo.' Timothy Colton, Department of Government, Harvard University, USA