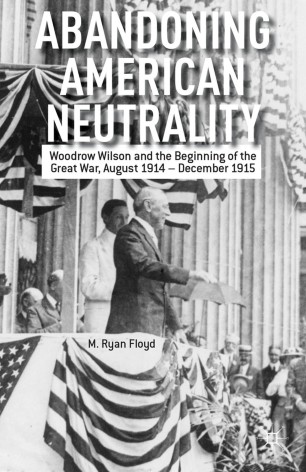 Woodrow Wilson and the Beginning of the Great War, August 1914–December 1915

During the first 18 months of World War I, Woodrow Wilson sought to maintain American neutrality, but as this carefully argued study shows, it was ultimately an unsustainable stance. The tension between Wilson's idealism and pragmatism ultimately drove him to abandon neutrality, paving the way for America's entrance into the war in 1917.

M. Ryan Floyd is Assistant Professor in the Department of History and Philosophy at Lander University, USA.

'Through its careful study of US trade, Floyd's book refocuses Woodrow Wilson's abandonment of US neutrality during World War I onto economic factors. It is an enlightening and well researched contribution.' - Emily S. Rosenberg, editor, A World Connecting, 1870-1945

'Abandoning American Neutrality is a profound and ultimately chilling portrait of a president who thought his rhetorical gifts could make fatally conflicting goals somehow coexist.' - Thomas Fleming, author of The Illusion of Victory: America in World War I

'Floyd's book will be particularly appealing to a wide audience because it is well written - he presents his narrative in a logical and clear manner that engages the reader. He also shows an impressive command of primary sources, including those from Great Britain. This book deals with an important and timely topic.' - Ross Kennedy, Associate Professor, Department of History, Illinois State University, USA