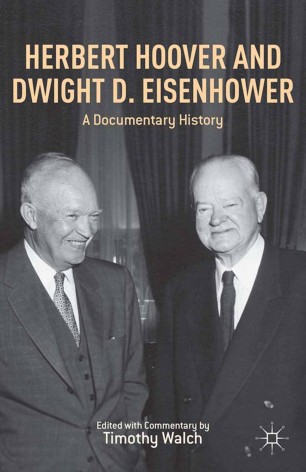 Bringing together core selections from and analysis of material documenting the uneasy collaboration between Herbert and Eisenhower, this collection incisively uses primary sources to illuminate the 1952 Republican nomination fight, the second Hoover Commission, and other key episodes during the Eisenhower presidency.

Timothy Walch is Director Emeritus of the Herbert Hoover Presidential Library and the author or editor of seventeen previous books on various historical topics including Herbert Hoover and Franklin D. Roosevelt: A Documentary History (1998), Herbert Hoover and Harry S. Truman: A Documentary History (1992), and Uncommon Americans: The Lives and Legacies of Herbert and Lou Henry Hoover (2003). He has appeared on MSNBC, CNN, CSPAN, and other networks and is frequently quoted on the role of former presidents in public life as well as on the growing importance of the vice presidency in publications such as the New York Times, the Washington Post, and USA Today.

"...this book conventienly brings them [primary source materials] together, arranged thematically in a way that allows researchers to gain better insight into the complicated relationship between these two Republican presidents. Summing Up: Recommended." - CHOICE

"Definitive is a word scholars tend to avoid, and for good reason. But there is no better word to describe this superbly edited collection that illustrates more fully than anything to date the complex, politically awkward, and yet ultimately touching collaboration between America's thirty-first and thirty-fourth Presidents. Products of the American heartland, they drew opposing lessons from their intense involvement with the rest of the world. Yet they looked for common ground where it could be found, and in the end their differences were generational as much as ideological. Timothy Walch does them both justice, in a volume that anyone interested in twentieth century America will find hard to put down." - Richard Norton Smith, presidential historian

"In this impressive documentary history, threaded with perceptive commentary, Timothy Walch examines the complicated friendship and 'uneasy collaboration' between two of America's most noted Republican presidents. Herbert Hoover and Dwight D. Eisenhower illuminates not only the character and ideology of its protagonists but also the bumpy terrain of Republican politics in the Eisenhower era. This volume is a welcome contribution to presidential studies." - George H. Nash, author of the first three volumes of The Life of Herbert Hoover

"Whatever his failures as president, Herbert Hoover was one of the most impressive men of the twentieth century. His long correspondence with Dwight Eisenhower sheds important light on Hoover's great record of public service, the state of the Republican Party at mid-century, and the minds of two American presidents." - Jonathan Alter, author of The Defining Moment: FDR's Hundred Days and the Triumph of Hope