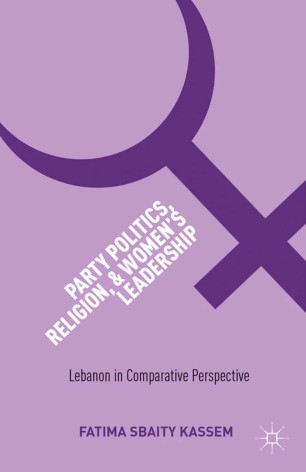 Exploring the interlinkages of political parties, religiosity, and women's leadership and nominations to public office, this book argues that as party religiosity increases, women's chances of assuming leadership positions fall. Combining qualitative and quantitative methods, it advances a new theory of party variation in religiosity.

Fatima Sbaity Kassem is the former Director of the UN-Centre for Women, Economic and Social Commission for Western Asia (UN-ESCWA) in Baghdad, Amman, and Beirut and a freelance consultant on gender and women's issues in Arab countries. She received her PhD from Columbia University, USA and was Regional Coordinator for the Fourth World Conference on Women (Beijing, 1995).

'Fatima Sbaity Kassem produces an incisive analysis. Cutting through prevailing explanations, she pinpoints political party religiosity as the driver of low female parliamentary representation in 330 parties and 26 countries. No previous work on women's political participation has targeted a precise variable so persuasively. Exceedingly readable and powerful, this book is an eye-opener for feminists, political activists, and social theorists.' - Suad Joseph, Distinguished Professor of Anthropology and Women and Gender Studies, University of California, Davis, USA

'This unique book with its bold argument about the impact of political party religiosity on patterns of women's leadership is sure to be debated and discussed. Backed by prodigious and original research broadly comparative and statistical in its cross-national vision, on the one hand, and astoundingly detailed in its close analysis of the case study of Lebanon, on the other Fatima Sbaity Kassem's findings are as illuminating as her thesis is provocative.' - Lila Abu-Lughod, Joseph L. Buttenwieser Professor of Social Science, Columbia University, USA