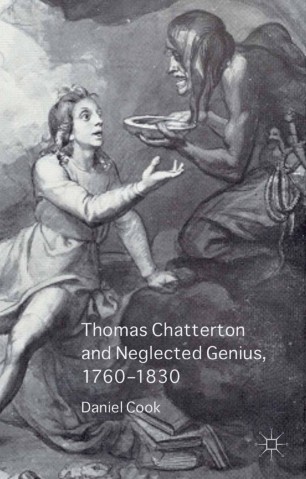 Long before Wordsworth etherealized him as 'the marvellous Boy / The sleepless Soul that perished in its pride', Thomas Chatterton was touted as the 'second Shakespeare' by eighteenth-century Shakespeareans, ranked among the leading British poets by prominent literary critics, and likened to the fashionable modern prose stylists Macpherson, Sterne, and Smollett. His pseudo-medieval Rowley poems, in particular, engendered a renewed fascination with ancient English literature. With Chatterton as its case study, this book offers new insights into the formation and development of literary scholarship in the period, from the periodical press to the public lecture, from the review to the anthology, from textual to biographical criticism. Cook demonstrates that, while major scholars found Chatterton to be a pertinent subject for multiple literary debates in the eighteenth century, by the end of the Romantic period he had become, and still remains, an unsettling model of hubristic genius.

Daniel Cook is a Lecturer in English at the University of Dundee, UK. He has published widely on eighteenth-century and Romantic-period literature, including a three-volume edition of The Lives of Jonathan Swift (2011) and (with Amy Culley) a collection of essays entitled Women's Life Writing, 1700-1850: Gender, Genre, and Authorship (2012).

“Daniel Cook offers the fullest treatment yet available of the earliest appearances of Chatterton’s work in print. He gives a meticulous account of the earliest publication of work by Chatterton in magazines, and of the manner in which Chatterton’s earliest editors presented his work … .” (Richard Cronin, Romantic Review, Vol. 27 (1), February, 2016)

'[An] elegantly scrupulous study... Cook's contribution to eighteenth-century and Romantic studies is to show how Chatterton's problematic status as an author figure is in fact a striking reflection of rapidly changing and competing attitudes towards literature, criticism, the English past, the vernacular canon, and, crucially, the construction of unified authorship... Cook has diligently examined the periodical press of the later eighteenth century and spins a sophisticated narrative out of its tangled web of opinions. This confident and eloquent book will be welcomed by those researching authorship, the history of editing, and the Romantic reception of earlier writers, while remaining at its heart a signal contribution to the study of Thomas Chatterton.' Nick Groom, The BARS Review