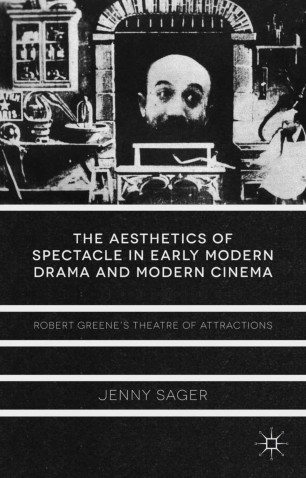 The Aesthetics of Spectacle in Early Modern Drama and Modern Cinema

Examining the work of the Elizabethan playwright, Robert Greene, this book argues that Greene's plays are innovative in their use of spectacle. Its most striking feature is the use of the one-to-one analogies between Greene's drama and modern cinema, in order to explore the plays' stage effects.

"Jenny Sager's The Aesthetics of Spectacle cleverly reimagines the use of popular cinema as a critical context to rethink the hidden aesthetic prejudices that surround current scholarship's neglect of the material, iconic spectacle of early modern drama." Craig Dionne, Eastern Michigan University, USA

"...offers a novel corrective to those who would put too much stock into the derision for professional theater that so permeates Greene's most quoted line. As The Aesthetics of Spectacle in Early Modern Drama and Modern Cinema succeeds in showing, Greene's plays Groatsworth's suspicion of "upstart Crows" and "Players hydes" notwithstanding frequently manifest a deep and sophisticated investment in the properties and conventions of the early modern stage." Kirk Melnikoff, Renaissance Quarterly

"Gravity broke a record in 2013 by taking $400 million in October at the box-office. Some time between 1611 and 1615, some twenty years after Friar Bacon first played, a riotous crowd shouted their suggestion for a play to be staged: 'Friars, Friars' (Sager 141). Sager's fresh and lively study shows that Robert Greene and his spectacular plays were themselves sixteenth- and seventeenth-century

box-office sensations; from emblem images and whale pamphlets through stoicism to early modern melancholy and religious tension, her monograph makes a series of eloquent and historically-informed readings that suggest why they were so popular and why the 'wonder, terror and possibility' generated by a film like Gravity are essential intellectual and aesthetic aspects of the early modern theater, too." Callan Davies, Shakespeare Bulletin