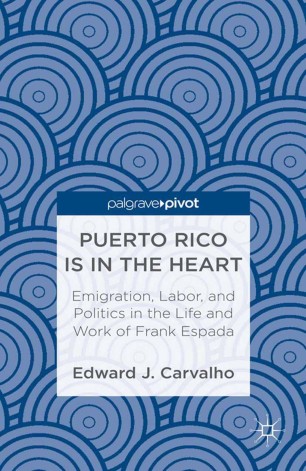 Puerto Rico Is in the Heart: Emigration, Labor, and Politics in the Life and Work of Frank Espada

Set against the backdrop of contemporary US economic history, Puerto Rico Is in the Heart examines the emigration, labor, and political experiences of documentary photographer, human rights activist, and Puerto Rican community leader Frank Espada and considers the cultural impact of neoliberal programs directed at Puerto Rico and Puerto Ricans.

"Edward J. Carvalho has written a brilliant, impassioned book that situates the Puerto Rican diaspora within a re-conceived history of neoliberalism told through the life and work of Frank Espada, the famed documentary photographer and civil rights activist. Puerto Rico Is in the Heart breaks new ground, not only in its commitment to exposing the racial and colonial influences on the very formation of neoliberal rationality, but in exploring, in rigorous detail, the interrelated realms of cultural politics, pedagogy and predatory capitalism. A work of gravity and grace that deserves the widest possible audience." - Susan Searls Giroux, McMaster University, Canada

"Richly textured and deeply insightful, Edward J. Carvalho's Puerto Rico Is in the Heart embodies not only a sensitive portrayal of Frank Espada, the human being, and an astute assessment of the aesthetic principles which have guided the trajectory of Espada's photography, but also an overarching sociohistorical contextualization both of the man and of his work. Along the way, Carvalho offers a substantial contribution to our understanding of the origins and evolution of the ugly phenomenon known as neoliberalism. Suffice to say that this is an important book." - Ward Churchill, author of Acts of Rebellion and Perversions of Justice