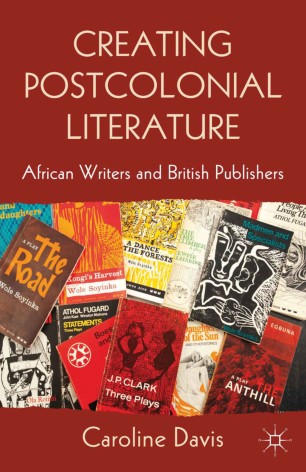 Using case studies, this book explores the publishing of African literature, addressing the construction of literary value, relationships between African writers and British publishers, and importance of the African market. It analyses the historical, political and economic conditions framing the emergence of postcolonial literature.

Caroline Davis is a Senior Lecturer at Oxford Brookes University, UK, in the Oxford International Centre for Publishing Studies, where she teaches courses in book history, print culture and publishing studies.

“This hugely informative, clearly written, book will be of obvious interest to scholars of African literature, postcolonial theory, and material cultures of the book. … While demonstrating what archival material can bring to the study of inequalities in the global literary marketplace, Davis’s study will encourage its readers to question and explore, in fresh ways, how the experience of literature is underpinned by the material conditions of its production and circulation.” (Ruth Bush, Research in African Literatures, Vol. 47 (1), Spring, 2016)

"Not since Graham Huggan's The Postcolonial Exotic has there been a book that so comprehensively examines the ways in which international publishers attempt to shape the literary expectations of readers of African literatures. This book will inspire postcolonial scholars to research the material conditions in which authors work, and to expand the framework of literary scholarship beyond 'close reading' to ask questions about how African literatures were brought to print in the mid- to late- twentieth century." - Professor Steph Newell, Co-Director (Centre for Colonial and Postcolonial Studies), University of Sussex, UK

"Caroline Davis makes an eloquent and for the most part compelling case for her arguments, and this is a fascinating, meticulously researched, and richly documented study that sheds new light on the emergence of postcolonial African literary publishing, and at the same time offers an exhaustive analysis of the historical, political and economic context of British publishing in Africa in general" - African Research & Documentation, Journal of SCOLMA

"I need a higher count of words to praise this essential study, which contains excellent case studies I cannot account for here studies of the acquisition, editing, and marketing of a variety of types of works. The whole book is indispensable. I cannot recommend it more highly." - Sarah Brouillette, Postcolonial Studies

"Creating Postcolonial Literature makes a valuable contribution to both African and postcolonial literary studies for its careful and nuanced exploration of a too-often neglected example of early Europhone publishing from the continent. Throughout its course, Davis identifies numerous continuities and discrepancies from previous studies of postcolonial publishing, enabling the study to illustrate deftly the creation and persistence of a hierarchical system of literary relations. The study is particularly insightful in its consistent and in-depth use of archival sources, demonstrating the complexity which negotiating African literatures has entailed in its early years, both between African writers and British publishers, as the title of the study supposes, but also among editorial staff themselves... a significant entry into the emerging field of postcolonial book history, with clear implications for how we conceptualize the consecration of literary value in world literatures." - Madhu Krishnan, Interventions

"Davis (Oxford Brookes University, UK) makes a significant contribution to African studies, the history of book culture, and literacy studies with this volume. She documents, in fascinating detail, the often neocolonial relationship between Oxford University Press (OUP) and postcolonial African writers, with specific focus on OUP's "Three Crowns Books" series. By virtue of meticulous research in archives in England, Nigeria, Kenya, and South Africa, along with interviews, she writes authoritatively about OUP's financial strategy in working with African writers; which authors are approved for publication and why; what kind of revisions/censorship OUP editors impose; why certain texts were selected for marketing to schools and to the Bantu education system in South Africa; and what one can learn from paratextual material, e.g., exotic book covers, blurbs, publicity. By way of case studies, she provides specific information about several writers, including Wole Soyinka, Athol Fugard, Raymond Sarif Easmon, Léopold Sédar Senghor, Obi Egbuna, and several others. She underpins her sophisticated analysis with the theories of Edward Said, Pascale Casanova, and Pierre Bourdieu. The volume is enriched by 20 illustrations, an extensive bibliography, and a thorough index. Summing Up: Highly recommended. All readers." - E. R. Baer, Gustavus Adolphus College, CHOICE

"...this is a fascinating, meticulously researched, and richly documented study that sheds new light on the emergence of postcolonial African literary publishing, and at the same time offers an exhaustive analysis of the historical, political and economic context of British publishing in Africa..." - Hans Zell, African Research and Documentation

"There exists today a considerable body of research, which is constantly being augmented, on provision of what is read from publishing houses in Africa... The most recent addition to this body of literature is Caroline Davis' excellent book Creating Postcolonial Literature: African Writers and British Publishers" - Walter Bgoya, speaking at the Africa Studies Association UK conference, Sussex University, September 2014

"Davis's approach to her material, which includes paratextual analysis, interviews, and extensive archival work, is rigorous but also judicious, especially in the portraits she draws of the various series editors and branch managers and the different ways they

interpreted and in some cases contested the OUP's African 'mission.' In providing such an exhaustive but also nuanced critical history, this fine book demands that we rethink the vexed issue of neocolonialism in British publishing in postcolonial Africa." James Graham, SHARP News

"The history of publishing in Africa has not received sufficient academic attention... This book makes an important contribution to our understanding of the nature of OUP's contribution to that process, and identifies the tensions and ambiguities of an enterprise that was caught between the desire to bring quality literature to the African reading public and the need to secure the profits of a 'charitable organisation' that was committed to providing major financial support for its parent university." Peter Kallaway, Journal of Southern African Studies

"Creating Postcolonial Literature is an excellent addition to a growing body of scholarship on postcolonial literary production... Davis weaves an engaging portrait of the people, decisions and strategies that account for the success of OUP in Africa through sophisticated analyses of archival information, including letters, financial reports and interviews." Grace A. Musilah, Africa