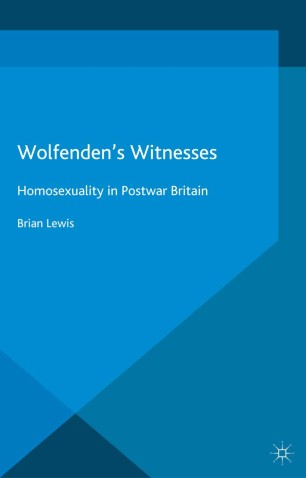 The Wolfenden Report of 1957 has long been recognized as a landmark in moves towards gay law reform. What is less well known is that the testimonials and written statements of the witnesses before the Wolfenden Committee provide by far the most complete and extensive array of perspectives we have on how homosexuality was understood in mid-twentieth century Britain. Those giving evidence, individually or through their professional associations, included a broad cross-section of official, professional and bureaucratic Britain: police chiefs, policemen, magistrates, judges, lawyers and Home Office civil servants; doctors, biologists (including Alfred Kinsey), psychiatrists, psychoanalysts and psychotherapists; prison governors, medical officers and probation officers; representatives of the churches, morality councils and progressive and ethical societies; approved school headteachers and youth organization leaders; representatives of the army, navy and air force; and a small handful of self-described but largely anonymous homosexuals. This volume presents an annotated selection of their voices.