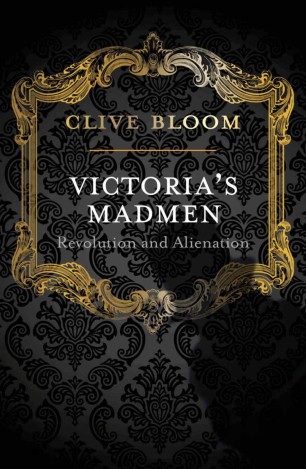 Victoria's Madmen is the story of those who were outcasts by temperament and choice; the non-conformists of the Victorian Age. Clive Bloom's readable account of the dark underbelly of Victoria's Britain captures the unrest bubbling under the surface of strait-laced Victorian society.

Clive Bloom is Emeritus Professor of English and American Studies at Middlesex University, UK. Widely published and Series Editor of Palgrave Macmillan's Crime Files series, he is the author of Violent London and Riot City , amongst many other titles.

'Victoria's Madmen seeks to argue that it is the perverse, radical and sometimes just downright insane minds of the nineteenth century that really prepared the way for modernity as we now know it. Bloom assembles a canon of 'Victoria's madmen' which freewheels through a bizarre miscellany of subjects including doubles, ghosts, anarchists and vegetarians'

'In Victoria's Madmen, Clive Bloom marshals a crowd of men and women to help him dismantle the myth of Victorian conformity and uniformity. Bloom's 'madmen' include spiritualists and anarchists, atheists and visionaries, socialists, nudists and assassins they all contribute to creating a 19th century wilder and richer than the one we usually encounter'

'As an account of the age and the people who made (or alternatively unmade) it thus, it is a very enlightening, engrossing read.'

'This richly diverse book contains a number of gems it coveys well the bubbling energy of those in the Victorian era who swam against the tide, and many of whose ideas would become the language of counter-cultural modernity'

'...a fascinating read. It is all too easy to think of the 19th century as a century entirely filled with pious, conformist churchgoers, demure crinolines and over-stuffed drawing-rooms. Clive Bloom has worked at the margins, deftly interweaving the revolutionary, the rebellious and the downright odd to draw a more complex picture of a time of instability and change, a period filled with sedition as well as certitude. His 19th century is far stranger and more wild and far more exciting.'

- Judith Flanders, author of The Invention of Murder

'Clive Bloom has a fine reputation for writing accessible history. Here he turns his attention to a cluster of Victorians, some well-known, others long-forgotten, who espoused or inspired what seem some of the more bizarre and esoteric ideas of the nineteenth century. A good, thought-provoking read, often surprising and good fun.'

'Against the deadening, nostalgic idea of 'Victorian values', - usually seen from the establishment point of view - Clive Bloom has mustered a bizarre alternative army of republicans, spiritualists, theosophists, Christian Socialists, anarchists, golden agers, nudists, occultists, foreign revolutionists, environmentalists and civil servants, most of whom were considered mad when they were active. His surprising conclusion is that this apparently barmy army laid the foundations of modernity's counter-culture and in some cases of mainstream culture as well. We have met 'other Victorians' before, but none quite so colourful as these.'