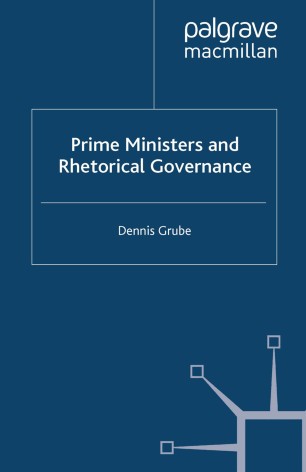 Prime Ministers in Westminister style democracies are forever talking to and communicating with the electorate. This ground-breaking book explores and analyses the uses of political rhetoric by Prime Ministers to explore patterns of communication and shows that the manner in which they talk to the electorate is central to day-to-day governance.

Dennis Grube is Lecturer in Politics at Griffith University in Australia, and holds a PhD in British History from the University of Tasmania.

'Prime Ministers and Rhetorical Governance is a sophisticated and accessible study which explores how top government leaders use rhetorical strategies to lead governments and to frame policy discourse and interventions. This study uses historical and comparative analysis to illuminate dimensions of rhetorical governance focusing particularly on the Westminster experience of Australia, Canada, New Zealand and the UK and successfully links them to the contemporary conditions of centralizing prime ministers, networked governance, and 24-7 news cycles. Grube's work will undoubtedly engage political scientists, but should equally interest scholars and practitioners seeking to understand how rhetoric strategies and practice by prime ministers conditions and informs public policy and public administration, opening up and constraining opportunities for change.'

"This is an important and insightful book. It not only enlarges our understanding of political leadership in British politics, but also reframes our grasp of rhetoric as an ever-evolving tool of governance in and outside formal political institutions. It will be a central point of reference for the expanding interest in political speech and communications."

'This book is an important contribution to our understanding of the relationships between political rhetoric, leadership and governance. Through a skilful comparative study of different Parliamentary regimes (The United Kingdom, Australia, New Zealand and Canada) Grube identifies an 'institutionalised' rhetoric which, he argues, shapes politicians behaviour. This is a bold claim which urges us to think afresh about the power (and the weakness) of Prime Ministers'.