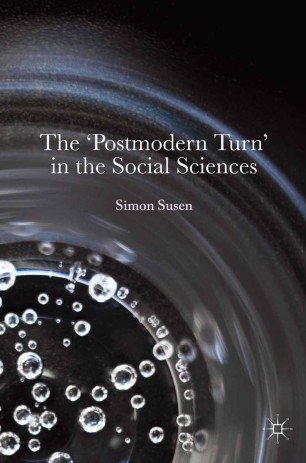 The ‘Postmodern Turn’ in the Social Sciences

Simon Susen examines the impact of the 'postmodern turn' on the contemporary social sciences. On the basis of an innovative five-dimensional approach, this study provides a systematic, comprehensive, and critical account of the legacy of the 'postmodern turn', notably in terms of its continuing relevance in the twenty-first century.

“By showing where to look and how to do it when talking about the ‘postmodern Turn’ in the social sciences and by underlining a nuanced perspective on the relationship between Modernity and Postmodernity, Susen fully succeeds to present a threefold analytical exigency … . The ‘Postmodern Turn’ in the Social Sciences will prove to be an indispensable reading for future social scientists.” (Stefan Nicolae, Human Studies, 2018)

“Susen's book makes clear that a spirit of inquiry with distinct affinities with certain features of postmodernism has become widespread in the social sciences. … the book makes clear that postmodernism will continue to be an influential part of the social-scientific story, though not the only or even the main part. This is why this fine book makes an important contribution to the development of future new horizons for the social sciences.” (Patrick O’Mahony, Constellations, Vol. 25 (1), 2018)

“It is clear from Susen’s account that significant residues remain, even if he embraces aspects of postmodernism that I would question and criticizes aspects that I find valuable. But whatever disagreement this ambitious, stimulating study might spark, its particular merit is in reminding us that we have not put the postmodern challenge behind us.” (David D. Roberts, History and Theory, Vol. 56 (1), March, 2017)

“Both the ambition and thoroughness of the new book are hailed by an array of prominent people in their supporting cover statements. … Susen’s intention to provide the sort of comprehensive thematic mapping that will get beneath the level of more accentuated or descriptive approaches to postmodernism, which tend to be couched in terms of individual thinkers, selective issues, and individual disciplines.” (Gregor McLennan, European Journal of Cultural and Political Sociology, Vol. 4 (1), February, 2017)

“This book is researched well, and fulfils its postmodern function as a product by being a pleasure to hold, look at and read. … The book is useful for PhD students because it gives an overarching introduction to contemporary debates and critical thinking on epistemology and methodology in sociology, politics and history. … the book will serve as a useful reference source about contemporary critical thinking in the social sciences.” (Michael Rush, International Sociology Reviews, Vol. 32 (2), 2017)

“This is simple but both meaningful and useful analytical contribution, enhancing our understanding of the origins of postmodernism … . Pursuing the goal of investigating the impact of postmodern thought on contemporary sociological discourse, Susen provides a remarkably precise, fine-grained and detailed account of present status of the social sciences. … It should be noted, however, that Susen takes a clear and critical stance on postmodernism.” (Vincenzo Mele, Journal of Classical Sociology, Vol. 17 (1), 2017)

“The book could be read as an encyclopedia of postmodernism, as it explains the majority of the relevant concepts and theories … .” (Morteza Hashemi, Philosophy of the Social Sciences, Vol. 47 (4-5), 2017)

“The ‘Postmodern Turn’ in the Social Sciences is a book that offers more than one would assume merely on the basis of the title. … What’s even more noteworthy is that the extension of the scope of research comes as a result of the author’s decision to deal with the ‘postmodern’ theory … .” (Ana Birešev, Sociologija, Vol. 59 (1), 2017)

“The postmodern still matters, and there is, Susen’s work demonstrates, room for returning to it at length – although, by the end of the book, the reader might never feel the need to read another on the subject. Because Susen encompasses just about everything written on this topic, and goes beyond it in a massive and dense work of synthesis and systematization.” (Chamsy el-Ojeili, Thesis Eleven, Vol. 140 (1), 2017)

“Simon Susen’s The ’Postmodern Turn’ in the Social Sciences achieves that inter alia in the domain of methodology through the exemplar of discourse analysis which is characterised by its eclecticism or pluralism of its sources in different disciplinary fields. … Susen leaves open the possibility that postmodern writing can be interpreted in non-idealist ways.” (Howard Feather, Journal of Political Power, Vol. 9 (2), June, 2016)

“When I initially read this my first thought was that this book was going to be a jargon packed and obscurantist rant by a social science historian with a chip on his shoulder against postmodernism. But this is not at all the case because for me it turns out to be a complex and thoughtful analysis of the most significant changes and challenges to social science thinking and practice in the past two generations of scholars.” (Alun Munslow, Rethinking History, Vol. 20 (4), January, 2016)

“Simon Susen’s new book on discourses of the postmodern and postmodernism aims to provide an original, systematic, exhaustive, critical and – most audaciously – definitive statement of their impact in the social sciences. … Accessibly written, Susen’s book treats the topic of postmodernism by theme rather than by author – though one will find innumerable references to a wide range of authors associated with the postmodern.” (David Toews, Canadian Journal of Sociology, Vol. 41 (1), 2016)

“Simon Susen has produced what is surely the definitive account of postmodern social, political, and cultural theory … The achievement of this book is to document, with meticulous accuracy and precision, the vast variety of ways in which social theory has responded to these changes in the course of the to-and-fro over ‘the postmodern.’” (William Outhwaite, International Journal of Politics, Culture, and Society, Vol. 29 (3), 2016)

“This book supplies a remarkably researched and painstakingly detailed descriptive narrative of a putative shift from modern to postmodern. … It is full of fine-grained description and is extremely comprehensive. It is a book that could find a thankful reader in anyone requiring a systematic review of the projects of modernity and postmodernism, and their relative strengths and weaknesses.” (Sarah Burton, LSE Review of Books, blogs.lse.ac.uk, November, 2015)