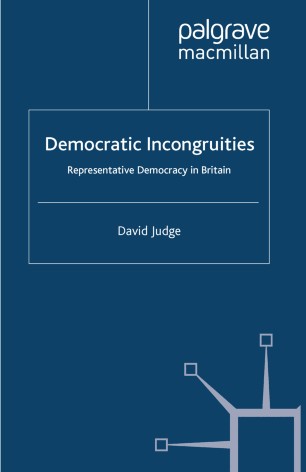 David Judge is Emeritus Professor of Politics at the University of Strathclyde, UK. He is the author/co-author/editor of 12 books, including The Parliamentary State, Representation: Theory and Practice in Britain, and Political Institutions in the United Kingdom, and numerous articles/chapters on legislative institutions, representative democracy, and decision-making in Britain and the EU.

'Judge has long been one of the most perceptive analysts of parliament, and continued to argue for the importance of studying parliament even after it became for a time unfashionable to do so. He has been amply vindicated by the renewed interest in how parliament works, and its continuing importance in British politics... This book offers further reflections on the themes with which he has been concerned throughout his career, particularly the tension between representation and democracy in representative democracy, and the many incongruities and anomalies in the particular ways in which it has been practised in Britain... For Judge, parliamentary democracy remains the frame within which politics is conducted in Britain, and its incongruities continue to shape political outcomes and developments. He provides a lucid and arresting diagnosis of our present discontents.' Andrew Gamble, Journal of Legislative Studies

'David Judge's Democratic Incongruities is a timely intervention in the debate surrounding British democracy that often feels to be getting more complicated by the minute. Judge seeks to guide readers through a number of what he refers to as 'concerns', both in the sense of 'a matter of importance and interest' but also as 'matter[s] of anxiety and unease', relating to the state of modern British politics. Judge tackles these [concerns] with clarity, each chapter working both as part of the whole argument and equally as a stand-alone consideration of the specific 'problem' under scrutiny. Throughout, Judge does not seek to argue for a particular direction that British democracy should be taking, but is instead fastidious in highlighting the contradictions and incongruities that lie in many of the contentions of those who do. The book raises more questions than answers in many ways, but will remain a fine contribution to Judge's existing writings on the subject of representation.' - Peter Allan, Political Studies