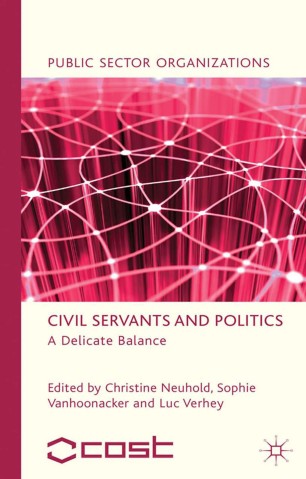 This comparative study focuses on the changing relations between civil servants and politicians in the European Union in the last two decades. As well as national case studies this book also looks into politico-administrative relations in supranational institutions such as the European Commission and the European Parliament.

CHRISTINE NEUHOLD is Associate Professor of European Governance within the Department of Political Science, Faculty of Arts and Social Sciences, Maastricht University, the Netherlands. She is a political scientist by training and holds her doctoral degree from the University of Vienna. Her main research interests include the role of parliaments and bureaucracies within the European system of governance.

LUC VERHEY is a Member of the Advisory Division of the Dutch Council of State and Professor of Constitutional and Administrative Law at the Leiden Law School, Leiden University, the Netherlands. His main field of research is constitutional law with a particular focus on parliamentary law, public accountability, legislation and human rights.

'This anthology deals with an enduring and highly important theme in public administration: the extent to which officials are recruited and promoted according to party-political criteria. The theme is crucial because it is related to administrative effectiveness and trust in government. The authors present cases that illustrate very well the many variants of such politicisation within Europe.'

This interesting book is a significant addition to the literature on the interface between elected and unelected public officials. It is topical, intelligent in its selection of case studies - the chapters on the eurocracy are original and rigorous- and balanced in its conclusions. It nuances what 'politicisation' of public administration means in a changing Europe with its multiple layers of governance, facing issues of great complexity and under permanent media spotlight. This is an important book to anyone wishing to understand politics.