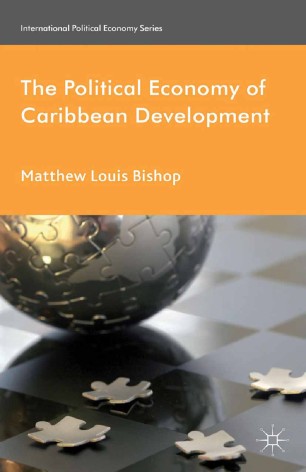 The Political Economy of Caribbean Development

Studies of the global political economy have rarely engaged with development in the Caribbean, the thought of its indigenous intellectuals, or the non-sovereign territories of the region. Matthew Bishop compares the development of the independent English-speaking islands of St Lucia and St Vincent and their non-sovereign French neighbours, Martinique and Guadeloupe. By explaining how distinctive patterns of British and French colonialism and decolonisation came to bear on them, he investigates how very different patterns of development have subsequently ensued, often with startling consequences in this era of globalization and crisis. By engaging with the empirical reality of the Caribbean, his study sheds light on a range of wider debates relating to development, indigenous thought, post-colonial sovereignty, small states, and the contemporary evolution of the global political economy.

Matthew Louis Bishop is Lecturer in International Relations at the University of the West Indies, Trinidad and Tobago. He holds an honorary fellowship from the Sheffield Political Economy Research Institute (SPERI), in the UK, and has been a visiting fellow at KITLV in the Netherlands. He is also the co-author, with Jean Grugel, of Democratization: A Critical Introduction (2013).

'The first truly comparative study of the forces of political and economic decision-making on the political development of the contiguous French and English-speaking countries of the Eastern Caribbean. - Vaughan Lewis, University of the West Indies, Jamaica

'A timely and important contribution to the literature on Caribbean political economy, small states, the non-independent Caribbean, and critical and comparative IPE. Matthew Bishop skilfully integrates a wide range of disparate concerns and issues into a comparative analysis of development in the Anglophone and Francophone Caribbean which forces those of us working in the broad fields of development and IPE to think afresh about the boundaries and implications of our work." - Anthony Payne, Sheffield Political Economy Research Institute, UK

'A study which is well-written, highly readable, comprehensive and successful in incorporating theoretical analysis. It is a significant contribution to the literature on small island developing states and is probably the first to examine and compare in great detail the challenges facing the polities and economies of two culturally distinct - French and English-speaking Caribbean areas. Although the author offers details on four very small states, he also succeeds in elucidating many significant issues that apply to the broader Caribbean region.' - Jacqueline Braveboy-Wagner, City University of New York, USA