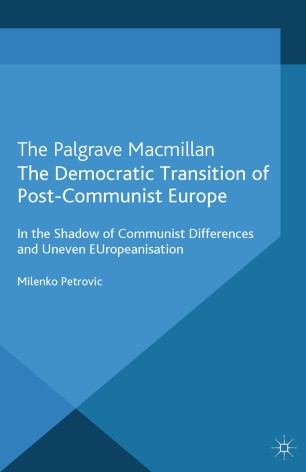 The Democratic Transition of Post-Communist Europe

In the Shadow of Communist Differences and Uneven EUropeanisation

Tracing both economic and political developments through the prism of history as well as more recent developments, this book casts new light on the role of communist history in setting the different regional successes in post-communist transition.

The book convincingly explains the entire transitional process in post-communist states from several angles. It traces both economic and political developments through the prism of history as well as the most recent developments. It casts a new light on the role of communist history in setting the different regional successes in post-communist transition. Unobtrusive, factual and ultimately convincing, the author's argument wins support right from the start.

In this powerful contribution to the literature on the democratisation of post-communist Europe, Milenko Petrovic's path-breaking study shows that the slower movement towards parliamentary democracy and a market economy in the Balkan states was not in fact the result of some innate political or social inferiority but rather of the significant differences in the nature of communist power in those states.

This impressive account of the different trajectories of the countries in East Central Europe and the Balkans from the pre-communist period through to their highly differentiated EU integration experiences has the hallmarks of a benchmark study. The intricate inter-weaving of economic and political historical threads is unerringly unpicked and exposed to critical analysis by an author with a deep personal and academic knowledge of these countries.

It is now almost a quarter of a century since the collapse of communist power in Central and Eastern Europe, and the time is ripe for a new, deep analysis of the reasons for the very diverse trajectories in the region. Milenko Petrovic has provided just such an analysis. This is a book that will force scholars to revisit and recast many of the dominant interpretations of post-communist Europe.