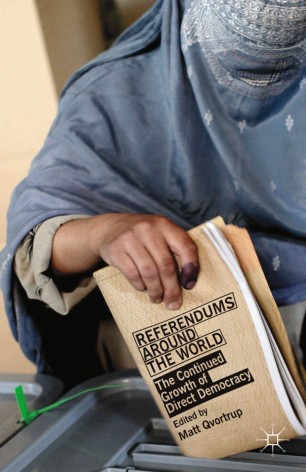 Referendums Around the World

The Continued Growth of Direct Democracy

Surveying all referendums around the world since 1793, Dr Qvortrup and contributors provide a thorough account of why and when citizens have been asked to vote on policy issues. Referendums Around the World is essential reading for political scientists and others interested in direct democracy as well as representative government.

'Referendums Around the World offers a comprehensive literature overview, both empirical and theoretical, on referendums. Much more formidable, however, are the historical analyses of referendums all over the world, from Europe to Sub-Saharan Africa and Oceania, and from the United States to the ex-Communist countries. This book is a 'must-read' for anyone interested in the referendum as an institution that is consequential not only for law-making and constitutional revisions, but also for its role in the collapse of the Soviet Union, the fall of Pinochet, the derailing of European Unification, and the approval of authoritarian regimes and constitutions.' George Tsebelis, Department of Political Science, University of Michigan, USA

'This volume is a worthy successor to the global survey of referendums undertaken two decades ago by David Butler and Austin Ranney. Dr. Qvortrup has assembled an impressive group of scholars from around the world to bring both their local expertise and comparative understanding to the contemporary study of the various forms and applications of direct democracy. Strengthened by Qvortrup's own broad theoretical and empirical knowledge of the subject, this work will be welcomed by both scholars and practitioners as the use of direct democratic institutions and practices continues to expand.' Lawrence LeDuc, Department of Political Science, University of Toronto, Canada

'Referendums Around the World updates the classic works on referendums, provides detailed descriptive data, and serves as a splendid introduction to these fascinating institutions. The thoughtful chapters on different regions stress the importance of the context in which a referendum or initiative takes place and the variety of purposes that it can serve. These include spurring or checking the usual aggregation and policymaking processes, authorizing constitutional change, or legitimizing authoritarian repression.' G. Bingham Powell, President of the American Political Science Association and Marie C. Wilson and Joseph C. Wilson Professor of Political Science, Department of Political Science, University of Rochester, USA

'Anyone wishing to learn about the use of direct-democratic devices in different regions of the world should take note of this book.' Wilfried Marxer, Liechtenstein Institute