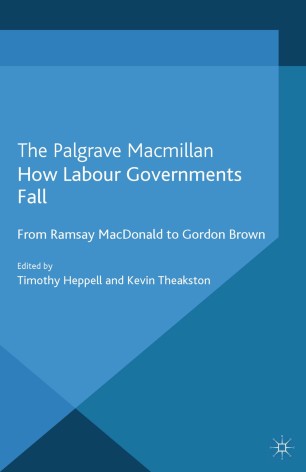 From Ramsay MacDonald to Gordon Brown

What similarities exist between the reasons for Labour losing office in 2010 and those behind why previous Labour governments were defeated? This edited volume provides a detailed historical appraisal which considers the importance of themes such as economic performance; political leadership and the condition of the Conservatives in opposition.

'Notwithstanding the recent electoral success of New Labour under Tony Blair, Labour governments falling from office after relatively brief spells in power have been a common feature of the political landscape. Yet relatively little academic attention has been paid to the generic and comparative context, factors, contingencies and consequences of Labour's frequent and not insubstantial election defeats in power. This timely and original collection, which combines the insights of a select and expert band of Labour historians and political scientists, illuminates the common and exceptional, external and internal, recurrent and contingent factors and developments that have contributed to Labour's uneasy grasp on power. In its systematic, multi-dimensional and accessible analysis, it tells us why Labour has failed historically, sociologically, ideologically and presentationally to make the leap to natural party of government.

In marked contrast to the performance of many of their European counterparts, until 2001 no Labour government had ever been reelected with a working majority after a full term in office. Nearly ninety years after Ramsay MacDonald first led the party to power in a minority government we still know remarkably little about why so many Labour administrations have been rejected at the ballot box. Bringing together an impressive range of historians and political scientists, this important collection directly addresses the issue through a set of well researched and engaging case studies. In identifying many of the reasons why Labour administrations have run into difficulties, the volume makes a valuable contribution to the subject, one that will provoke further debate and is likely to generate significant lessons for the future.'