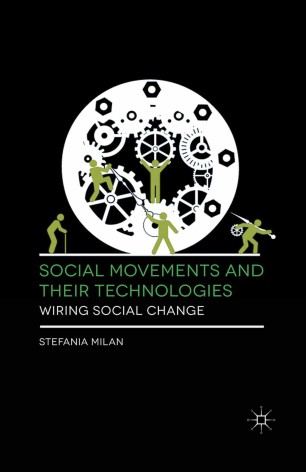 Social Movements and Their Technologies

"Stefania Milan's study of emancipatory media activism represents a distillation of her considerable research into its many forms over a number of years and in a number of countries, inflected by her own experience as an information activist. She gives full weight to the critical gender dimension of the subject, to a spectrum of technology uses, and the intersections with vital policy issues. Hers is a very substantive contribution to debate around social movement media." - John D.H. Downing, Editor, Sage Encyclopedia of Social Movement Media

"Emancipatory communicative practices are at the basis of social movement action. Through innovative ideas and rigorous research, this volume has much to contribute to our understanding of media and political activism." - Donatella della Porta, co-editor, The Wiley-Blackwell Encyclopedia of Social and Political Movements

"Stefania Milan's Social Movements and Their Technologies is a comprehensive work on dissent networking and a must read for anyone wishing a thorough understanding of the topic." - Oxblood Ruffin, member of the hacker group, Cult of the Dead Cow

"Social Movements and Their Technologies provides a rich overview of the Internet-enabled social movements that are working from the 'outside-in' to promote Internet openness and rights. Backed up with detailed empirical research, this book is a must-read for those interested in grassroots and alternative forms of political participation in the digital age." — Ron Deibert, Director of the Citizen Lab, University of Toronto, Canada, and author of Black Code: Inside the Battle for Cyberspace

"Social Movements and Their Technologies is a highly topical examination of the nature of media justice work in the world today, and Milan convincingly argues that we should take seriously that the media activism she discusses can legitimately be studied as a social movement in its own right." - Journalism and Mass Communication Quarterly, 2014

Social Movements and their Technologies explores the interplay between social movements and their 'liberated technologies'. It analyzes the rise of low-power radio stations and radical internet projects ('emancipatory communication practices') as a political subject, focusing on the sociological and cultural processes at play. It provides an overview of the relationship between social movements and technology, and investigates what is behind the communication infrastructure that made possible the main protest events of the past fifteen years. In doing so, Stefania Milan illustrates how contemporary social movements organize in order to create autonomous alternatives to communication systems and networks, and how they contribute to change the way people communicate in daily life, as well as try to change communication policy from the grassroots. She situates these efforts in a historical context in order to show the origins of contemporary communication activism, and its linkages to media reform campaigns and policy advocacy.

Stefania Milan is Assistant Professor at Tilburg University, Netherlands and a fellow at the Citizen Lab, University of Toronto, Canada. Her research encompasses social movements and activism, the interplay between technologies and society, and the politics of code.