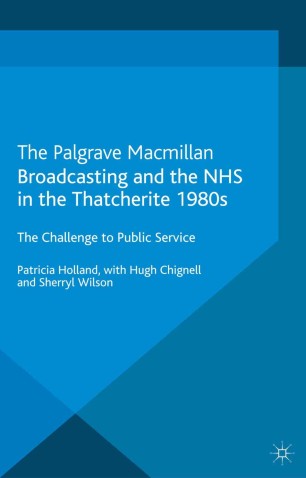 Broadcasting and the NHS in the Thatcherite 1980s

The Challenge to Public Service

Patricia Holland offers a fascinating study of the ways in which changes to public services, and shifts in the concept of 'the public' under Margaret Thatcher's three Conservative governments, were mediated by radio and television in the 1980s.

Patricia Holland is a writer, lecturer and researcher specialising in television, photography and popular imagery. She has many publications in these fields, including The Television Handbook (2000) and The Angry Buzz: 'This Week' and Current Affairs Television (2006). She is currently a lecturer at Bournemouth University, UK, and has previously worked as an independent filmmaker, a community bookseller, a television editor and a freelance journalist.

'In a period in which the neo-liberal assault by all the three major political parties in the UK on the post-1945 welfare settlement has intensified, this book provides valuable insights into the relationship between politics, health and broadcasting in the 1980s when this process was set in motion. It is a serious and thoughtful engagement with the complex relationships that exist between broadcasting and society and deserves a wide readership.' - Professor Tom O'Malley, Aberystwyth University, UK

'To consider two of the most prominent public services in the UK broadcasting and the National Health Service (NHS) across one decade might seem like an unmanageable task. However, in the hands of experienced and respected broadcasting historians

'The strongest sections of this book are when it fully engages with the production backgrounds of the programmes discussed. Comparison of the two Radio 4 current-affairs series Analysis (1970 present) and File on Four (1977 present) are always illuminating, suggesting how the two series' different approaches to information gathering (detailed analytical interpretation and investigative journalism respectively) encouraged different ideological stances.' - Billy Smart, Critical Studies in Television 10.1