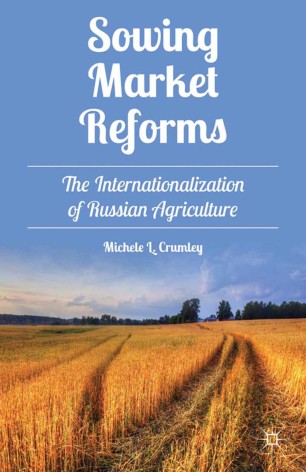 The Internationalization of Russian Agriculture

By examining a sector of the economy that was exposed to increased imports more than four decades ago, Crumley illuminates the economic pressures, resistance, and reform that help to shape Russia's agrarian sector today.

Michele L. Crumley is an assistant professor in the Department of Political Science at East Tennesse State University.

"Professor Crumley has produced a thorough, provocative, and wide ranging analysis of Soviet and post-Soviet, economics, politics, and in particular, their relationship with the Russian agrarian sector. The volume is thoroughly researched and documented, with a sound theoretical foundation, examining Russian agrarian developments between 1972 and 2012. Its focus on agrarian institutions, the relation between the institutions, free trade, political culture, and the impact of domestic structures provides a solid central thesis from which the book's arguments evolve. This volume provides a fresh look at crucial issues facing Russia, and is a welcome addition to the field of modern Russian studies." - Robert R. Thompson, Associate Professor of Politics, Arcadia University, USA

'The institutional, political, and social dynamics related to the Soviet economy were no less significant than the economic aspects. Crumley illustrates this masterfully in this expertly organized and well documented study of agricultural reform in Soviet and post-Soviet Russia. Her major finding, that various domestic factors have worked over time to constrain the opening of the country's agrarian sector, will not surprise informed readers. However, what this book illustrates is the influence of such factors, their continuity, across the Soviet and post-Soviet periods. In my opinion, this is one of the most important contributions of Crumley's study. This book holds lessons beyond the Russian case.' - Gregory Hall, Professor and Director, International Studies Program, Morehouse College, USA