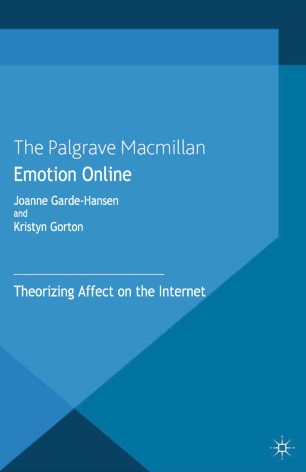 Theorizing Affect on the Internet

Travelling through theories of emotion and affect, this book addresses the key ways in which media studies can be brought to bear upon everyday encounters with online cultures and practices. The book takes stock of where we are emotionally with regard to the Internet in the context of other screen media.

Joanne Garde-Hansen is Reader in Media and has published Save As…Digital Memories (with Hoskins and Reading, 2009), Media and Memory (2011) and Geography and Memory (with Jones, 2012). She is Associate Professor of Culture, Media and Communication at the University of Warwick, UK.

Kristyn Gorton is Senior Lecturer in Television Studies at the University of York, UK. She is the author of Theorising Desire: From Freud to Feminism to Film (2008) and Media Audiences: Television, Meaning and Emotion (2009). She has written numerous articles on television and film for journals such as Critical Studies in Television, Studies in European Cinema and the Journal of British Film and Television.