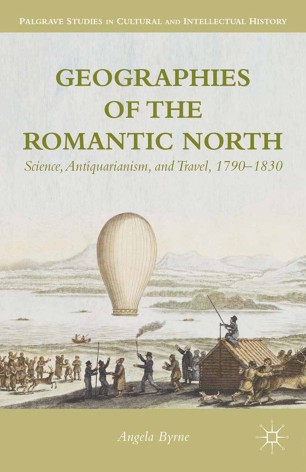 Geographies of the Romantic North

This book examines British scientific and antiquarian travels in the "North," circa 1790–1830. British perceptions, representations and imaginings of the North are considered part of late eighteenth- and early nineteenth-century processes of British self-fashioning as a Northern nation, and key in unifying the expanding North Atlantic empire.

Angela Byrne is Lecturer in History at the University of Greenwich, UK.

'Byrne restores the experience of Northern travels to its rightful place at the heart of European Romanticism. The reader is guided with great agility between antiquarian and ethnographic visions, traversing the liminal spaces of the North's own inhabited worlds and natural histories. At long last we have a book that provides a convincing critical analysis of the North in the formation of Britain's cultural identity.' - Michael Bravo, Head of History and Public Policy, Scott Polar Research Institute, University of Cambridge, UK

'This is a superb account of British northern travelers, demonstrating the holistic blend of the emerging sciences with the arts, literature, antiquarian interest and the taste for indigenous cultures. Angela Byrne's richly nuanced North stands out as a major projection screen for the imperial imagination, on par with the Orient or the Tropics, and as an emerging zone of cultural ideas and economic transactions foreshadowing today's interactive Arctic that is deeply integrated in world affairs.' - Sverker Sörlin, Professor of Environmental History, KTH Royal Institute of Technology, Stockholm, Sweden, and editor of Science, Geopolitics, and Culture in the Nordic Region