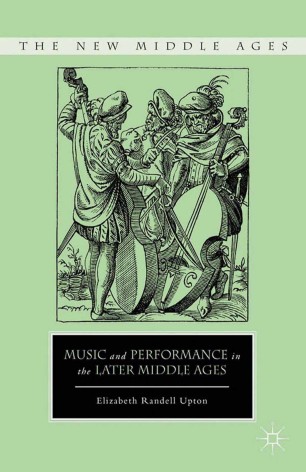 Music and Performance in the Later Middle Ages

This book seeks to understand the music of the later Middle Ages in a fuller perspective, moving beyond the traditional focus on the creative work of composers in isolation to consider the participation of performers and listeners in music-making.

Elizabeth Randell Upton is Assistant Professor in the Musicology department at UCLA, USA.

'An approachable and strongly argued book that takes a wide lens to the question of how secular music fits into late medieval culture. Drawing on evidence as diverse as the context of wedding practices, scribal habits and agendas, and stylistic commonalities of certain kinds of songs, Upton forges a historical perspective on medieval song that highlights performance and listening an enriched view of 'medieval musicking' that reveals new tools for understanding and assessing the dates, the purposes, and the meanings of songs and song collections. She makes the important observation that songs, like manuscripts themselves, are historical artifacts, and as such bear cultural fingerprints that point toward particular social functions for the music itself. Framing her discussion with two important works by Guillaume Du Fay, 'Resveilliés vous' and 'Nuper rosarum flores,' Upton provides the reader with insights into how we ourselves are constrained by our own cultural presumptions in trying to think about the music of the past.' - Cynthia J. Cyrus, Professor of Musicology, Vanderbilt University, USA

'This is an immensely valuable study, grounded in a thorough knowledge of the music itself and its performative aspects as well as careful study of historical evidence seldom considered so extensively in musical studies, such as court traditions, ceremonial, and etiquette. Randell Upton's reading of the evidence illuminated the repertory of fifteenth century song in new and original manner. This book will be invaluable not only to music hostorians but to social and cultural historians as well.' - Alejandro Enrique Planchart, Emeritus Professor of Music, University of California, USA